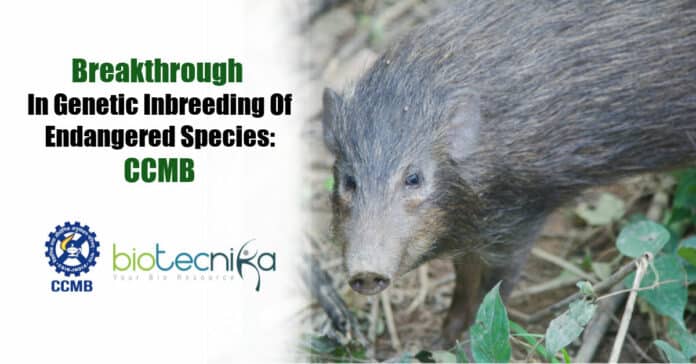 The Indian Wildlife Protection Act and IUCN have listed pygmy hogs as rare and endangered species. The current wild population is approximately less than 300, including reintroduced animals. The original population is now confined to as few as 50 that too only in the Manas National Park in Assam.

Attempts to conserve this species from extinction involve the preservation of its only habitat and captive breeding. As of 1996, more than 500 Pygmy Hogs have been successfully bred, and 142 captive-born Pygmy Hogs have been freed into the wild as part of the Pygmy Hog Conservation Program (PHCP). This Conservation Program is a collaborative project led by the IUCN/SSC Wild Pig Specialist Group, the Ministry of Environment and Forests, the Durrell Wildlife Conservation Trust, the Forest Department, the Government of Assam, EcoSystems-India, the Government of India, and Aaranyak.

All of these captives, however, were the offspring of seven wild-caught individuals. The most difficult aspect of long-term captive breeding is preserving genetic diversity within a population across multiple generations. Inbreeding caused by mating between related individuals within a community established with a small number of founders could result in a loss of genetic

The CSIR-CCMB-LaCONES and PHCP worked together to investigate the genetic and reproductive fitness of these captive-bred animals.

Dr. G. Umapathy’s team from CSIR-CCMB LaCONES analyzed genetic variations in 36 captive-bred pygmy hogs across the course of 8 generations. The team also investigated whether genetic diversity and reproductive success are accountable for any health decline.

The research didn’t find any evidence of genetic inbreeding between individuals across generations.

Dr. Umapathy stated that this is possible due to the Program’s strict scientific conservation breeding protocol. They had cautiously chosen mates with the least kinship. However, recent generations show a small rise in relatedness. As a result, they would suggest introducing a few wild pygmy hogs into the breeding pool.

Dr. Goutam Narayan, PHCP, and EcoSystems-India stated they chose unrelated mating pairs with care and bred them in distinct family lines. They are pleased that this research has demonstrated that genetic inbreeding can be avoided in a small captive population, despite the founder population being very small – if proper rules are followed.

Dr. Vinay K Nandicoori, Director, CCMB, stated that this is preeminent research of its kind on Indian animals to investigate the genetic impact of long-term captive breeding of endangered animals. The research outcomes will help in guiding the administration and optimizing breeding protocols in PHCP and other related conservation breeding programs.