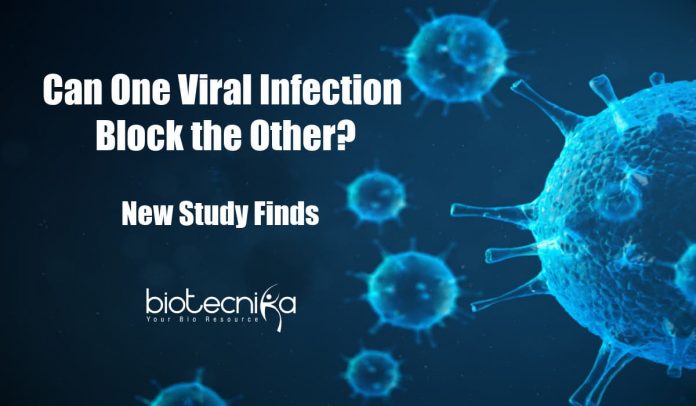 One Respiratory Virus Can Block Another Virus’s Infection: Study Finds

According to a study by scholars at Yale University, it is indicated that through the stimulation of antiviral defenses in the mucosa of the airways, one respiratory virus can block the infection from another respiratory virus.

In March 2009, the first case of swine flu or H1N1 (influenza A) was reported in Mexico.  In April, the virus was detected in the US, and from there it quickly spread to the rest of the world, according to the US Center for Disease Control and Prevention (CDC).

According to a new study published in The Lancet Microbe, it is suggested that in Europe, by the annual rhinovirus epidemic (the yearly spread of common cold cases during the autumn months of September to mid-December), the further spread and second wave of the 2009 pandemic of the H1N1 virus may have been stopped. This spurred the researchers behind this new study and they wanted to explore whether the spread of one virus, particularly the common cold can stop or block the spread of other viruses.

At the Yale-New Haven Hospital, a clinical data analysis to investigate the co-occurrence of rhinovirus (which is the most common viral infectious agent that causes upper respiratory tract infections, especially the common cold, in humans) and the influenza A virus was conducted by the Yale University researchers. In order to investigate the interference between the two viruses, they also did an experimental infection study.

Over three consecutive winters between 2016 and 2019, respiratory specimens from adults were taken and analyzed. Around 8,284 respiratory samples positive for either the influenza A virus or the rhinovirus were collected by the researchers. The epithelial cell cultures developed from the respiratory samples collected from the participants were injected with rhinovirus by the researchers in order to understand how rhinovirus infection affects a subsequent influenza infection. Then they inoculated the same cultures with influenza A H1N1 virus three days after the rhinovirus infection took hold. Three days later, to check for RNA expressions and interferon-stimulated gene responses, which would imply that the body triggers antiviral immune responses, they used a reverse transcription-quantitative PCR.

Ultimately, it is proved in the study that through the stimulation of antiviral defenses in the mucosa of the airways, one respiratory virus can block the infection from another respiratory virus. This also supports the hypothesis that the spread of the swine flu pandemic in Europe was disrupted by the occurrence of the rhinovirus epidemic in fall 2009.

Therefore, the researchers recommend that while designing interventions and treatment protocols for seasonal influenza and even the COVID-19 pandemic, these findings should be taken into account since viral interference of this type can potentially affect the course of a pandemic or an epidemic.