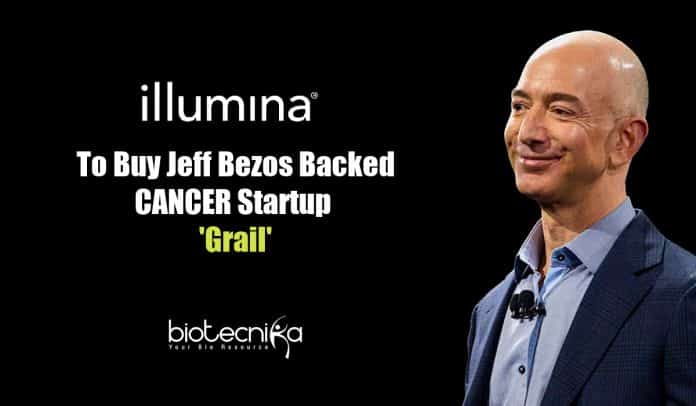 On Monday, the biotech firm Illumina said they will buy back Grail, the cancer-detention startup for $8 billion, which will buy out Amazon chief Jeff Bezos and other investors.

two weeks before the announcement of the deal, Grail had filed for an initial public offering that would give Illumina access to a medical test that can detect dozens of types of cancer called Galleri.

Francis deSouza, CEO and President of the gene-sequencing company Illumina said in a statement that Galleri is one of the most promising tools to fight cancer and that they are excited to welcome Grail back to Illumina to help transform cancer care.

Grail was founded by Illumina in 2016, which then turned into a separate company. Winning investments from Microsoft co-founder Bill Gates, Bezos, and Johnson & Johnson, Grail went on to raise $2 billion to develop Galleri and other technologies.

According to a news release, Illumina and other stakeholders of Grail will get $4.5 billion worth of Illumina stock and $3.5 billion in cash from the buyback deal. Currently, Illumina holds 14.5 percent of Grail’s outstanding shares. Illumina is hoping to close the deal by the second half of 2021.

Hans Bishop, CEO of Grail said in a statement that they are excited about this next step in their journey to transform cancer detection and outcomes and create value for health care providers and payers, patients, and their families and communities, stockholders, and employers.

After losing more than $275 million in 2018, Grail revealed in its Sept. 9 IPO filing a net loss of $244.8 million for last year. The company said they are not expecting any near-term revenue to offset their ongoing operating expenses and it won’t launch Galleri commercially until next year.