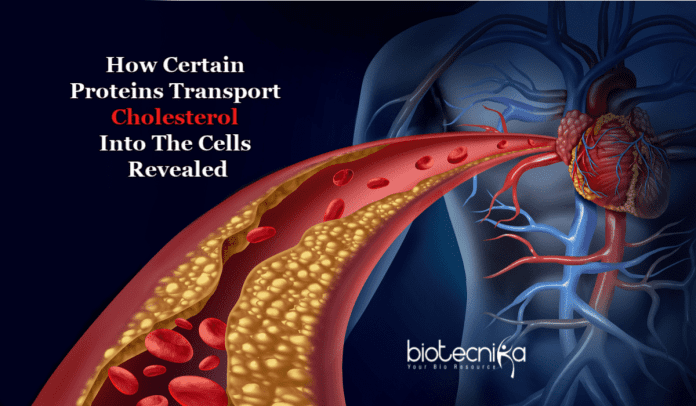 For the first time, scientists have shown how two proteins form a tunnel for bad cholesterol to enter our body cells.

This new finding could help develop future drugs for heart disease, a rare genetic disorder in children, and even the Ebola virus.

A team of researchers from UNSW Sydney analyzed the structure and function of proteins encoded by two genes NPC1 and NPC2 in detail and studied their role in transporting low-density lipoprotein (LDL) cholesterol into our body cells via lysosomes.

The proteins were studied using cryo-electron microscopes at the near-atomic level in great detail by the team of researchers, including those from Tsinghua University (Beijing) and Princeton University (New Jersey), said Rob Yang, UNSW Science’s Professor.

Before 2013, scientists had to theorize how membrane proteins functioned. But now they can actually see how they work. Prof Yang said they were able to look at the NPC1 and PC2 proteins and see how they play a major role in transporting LDL cholesterol into the cell.

NPC2 brings the cholesterol to the gate at the edge of the lysosome membrane, while NPC1 forms a tunnel for this cholesterol to enter the cells. Cholesterol is an essential building block of our

cells, but excess amounts of cholesterol in the blood can block the arteries, causing the heart attack.

Understanding how cholesterol enters the cells can help to develop future drugs that target NPC1 and NPC2 proteins, which would lower the amount of cholesterol in the blood.

Niemann-Pick disease type C is also a very serious health problem associated with NPC1 and NPC2 genes, often found in children. Mutations in the NPC1 gene can leave the LDL cholesterol trapped in the cell’s lysosomes, as it can prevent it from binding to the protein. As cholesterol builds up in cells, it can lead to cell dysfunction and even cell death. This could lead to progressive loss of function of nerves, brain, and other organs.

The mutations in NPC1 and NPC2 genes underlying this disease can be identified by sequencing the genes of affected people and accordingly develop targeted medicines to restore the protein’s ability to transport the cholesterol.

Other than encapsulating cholesterol before releasing it into the cell’s plasma, the lysosomes also have a protective function against the invading viruses. There are studies that show the Ebola virus enters human cells after binding to NPC1. The new findings on how cholesterol enter cells can also provide insights into developing therapeutic strategies for stopping Ebola.

Foreign invaders are normally broke down by the acidic conditions in lysosomes. But the NPC1 proteins facilitate a free passage for the Ebola virus to the cells, where it multiplies and infects other cells. Drugs could be developed that blocks the Ebola virus from binding to NPC1, exposing the virus to the lysosome’s acidic environment. The findings could have implications for developing treatments against COVID-19 since the virus could potentially use NPC1 for entering cells.

Professor Yang is hoping to collaborate with other researchers to study the connection of NPC1 to COVID-19.