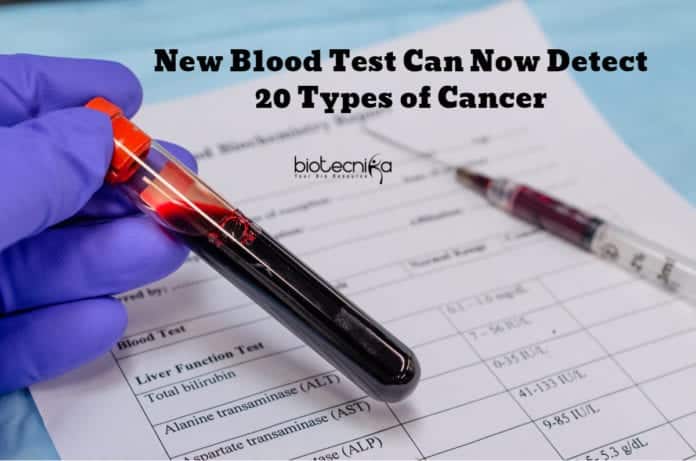 A new blood test could detect more than 20 types of cancer, allowing the detection of cancer in the earlier stages.

The Blood test spots changes in the genes, as cancer develops. This would allow early screening of cancer, according to scientists allowing sooner treatment.

The New Blood test for cancer has 99.4% accuracy meaning just 0.6% of cases were misdiagnoses of healthy patients. The test was able to detect one-third of patients with cancer in the first stage, and three-quarters of those with stage two disease.

Scientists have pledged to speed diagnosis so that by 2028, three-quarters of cancer patients are diagnosed at these two stages. Currently, 50% of patients receive a diagnosis before they reach stage three or four.

The New Blood Test For Cancer is advancement by US scientists. This blood test looks for abnormal patterns of methylation in the DNA. According to the researchers, this is an indication of cancer.

The study found the New Blood Test For Cancer could even highlight the cancer source with 90% accuracy. It includes cancers such as ovarian and pancreatic cancer which are some of the most difficult to spot.

The lead author of the study is Dr. Geoffrey Oxnard of Boston’s Dana-Farber Cancer Institute. It is part of the Harvard Medical School.

In the study, researchers analyzed more than 3,500 blood samples. They were in a lookout for cell-free DNA. These are a kind of DNA which enters the bloodstream after becoming detached when its parent cell dies.

The samples were taken from more than 1,500 cancer patients and more than 2,000 from healthy people without cancer.

Within this group, the test accuracy was 32% for patients with stage one cancer; 76% for those with stage two; 85% for stage three; and 93% for stage four.

According to Dr. Oxnard detecting, even a modest percentage of common cancers early could translate into many patients who may be able to receive more effective treatment

The research- New Blood Test For Cancer- was presented today at the European Society for Medical Oncology Congress in Barcelona, Spain.