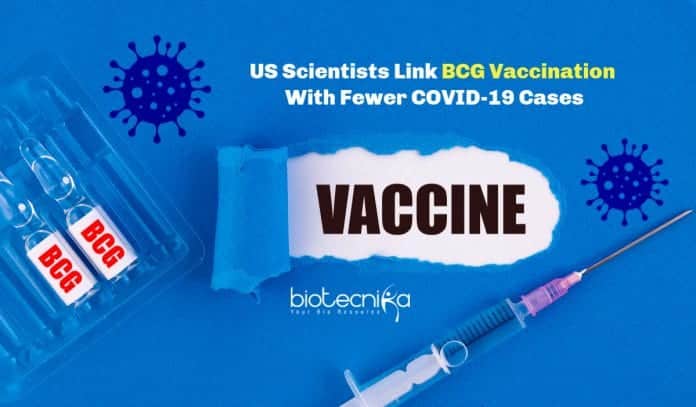 US scientists stated, the Bacillus Calmette-Guerin (BCG) vaccination to protect against tuberculosis is given to millions of children in India soon after birth, and it could be a turning point in the fight against the COVID-19.

By taking the examples of Italy and the United States, the study from the New York Institute of Technology (NYIT) states that the extent of COVID-19 influence might be linked to the BCG vaccination given at birth as studies suggest that the BCG vaccine reduce COVID-19 cases. The research is not released anywhere.

The researchers led by Gonzalo Otazu, assistant professor, biomedical sciences at NYIT sais, “We found that countries like Italy, Netherlands, and United States don’t have universal policies of BCG vaccination, and have been more seriously impacted compared to countries with universal and long-standing BCG policies.

The United States has actually reported nearly 1,90,000 COVID-19 positive cases with deaths more than 4,000, Italy has

The decreased morbidity and death rate might make the BCG vaccination a game-changer in this COVID-19 battle.

India’s universal immunization program includes the BCG vaccine and is given to millions of children at birth.

Experts from India stated they were confident and encouraged but it is prematurely to affirm anything.

Monica Gulati, senior Dean, Faculty of Applied Medical Sciences from Lovely Professional University, Punjab, told PTI that every small thing provides us a potential opportunity. But it will certainly be early to claim anything currently. But the positive side is that the BCG vaccination has proved effective against SARS infection.

She added, “The factor for hope during this pandemic is that the nations with BCG vaccine program are less intensely effected and BCG vaccine was effective against another coronavirus previously.

Deepak Verma of the department of Internal Medicine, Columbia Asia Hospital, Ghaziabad stated, “In the absence of any vaccine or drug for COVID-19, this is promising progress. To know how the vaccine for TB antagonizes COVID-19 – it will take some time and research experiments”.

He also added, “Quarantine and isolation are the only known way to stop the infection.”

“The findings of NYIT are fascinating, however, a lot more scientific information is required”, said Rakesh Mishra, director of the CSIR-CCMB, Hyderabad.

Mishra said, “We have stumbled on the research, however, we don’t have required scientific information about it. But we can rely upon this theory while making policies or approaches against this infection”.

He also added, “This correlation can’t be precluded entirely. I assume it will certainly be a surprise though.

The scientists from the United States claimed, BCG vaccine is one of the most extensively used vaccines worldwide, and it has existed for nearly a century as well as has shown to be effective in preventing meningitis and disseminated TB in disseminated.

They added, the vaccination is likewise thought to provide broad-ranging defense against respiratory infections, which is comparable to COVID-19.

The research study also included the work of Australian scientists who have recently announced strategies to fast track massive testing to see if the BCG vaccination reduces COVID-19 cases/prevents coronavirus in health workers.

The researchers said, the earlier a plan was developed, the most likely that a significant portion of the population, particularly the senior would be protected.

The researchers claimed. Iran, as an example, which has a current universal BCG vaccination plan, started in 1984, has an elevated death rate of 19.7 per million individuals.

According to the research study, Japan, in contrast, started its global BCG plan in 1947, and has about 100 times lesser deaths per million individuals, with 0.28 fatalities.

The researchers also studied the data of Brazil, which began its universal vaccination program in 1920 has an even lower death rate of 0.0573 fatalities per million individuals.

Numerous higher-income nations in Europe dropped their universal BCG vaccination programs between 1963 and 2010 as TB cases fell in the late 20th century.

The 23 remaining nations have either dropped BCG vaccination because of a decrease in TB occurrence or have traditionally chosen selective vaccination of at-risk groups.