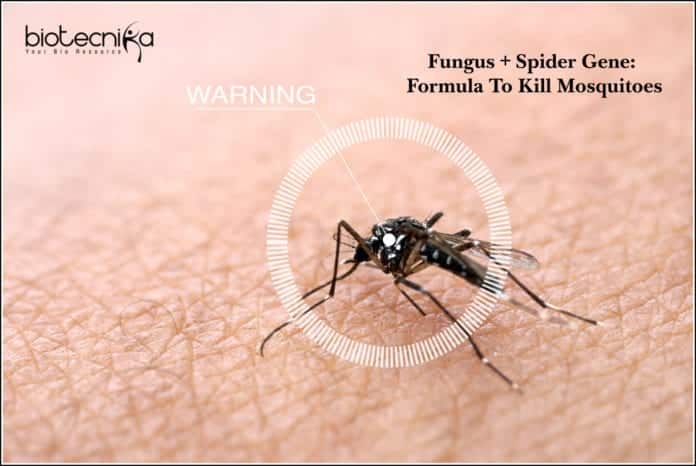 Mosquito Menace – Can it be ended once & for all? In order to stop lakhs of death casualties worldwide due to mosquito-borne diseases like Malaria & chikungunya – we will need to eradicate the mosquitoes – transmitter of lethal diseases.

Scientists globally have been using genetic editing tools in order to win the battle against the mosquitoes, but none have made it beyond laboratory testing.

Now, Researchers at the University of Maryland, have genetically altered a fungus to produce a spider toxin that kills mosquitoes. And, in out of Lab testing the fungus was able to reduce the mosquito population present by up to 99%.

According to a research paper published in the journal Science, the fungus used & modified by UMD researchers kills mosquitoes in the wild — but it isn’t particularly fast, meaning the mosquito still might have the time to infect someone with malaria.

To provide the fungus a boost, the team engineered it to produce a toxin derived from the venom of the Australian Blue Mountains funnel-web spider – Metarhizium pingshaense, which kills mosquitoes far more quickly. The team then tested the fungus in a “MosquitoSphere,” that a screen-enclosed placing in West Africa made to mimic a village.

The transgenic fungus used caused the mosquito population demise within 45 days of time. And it is as good at killing insecticide-resistant mosquitoes as non-resistant ones, said researcher Brian Lovett.

This Fungus + Spider Gene testing was first of its kind. For the first time, researchers have analyzed a transgenic way of combating malaria outside of a laboratory setting. Although the testing was a success, some worry about the controversial use of genetic editing tool and fear the release of a lethal genetically altered organism in the environment which can cause unknown issues.

“This analysis raises several urgent concerns,” Dana Perls of the environmental group Friends of the Earth told NPR. “Genetic engineering of fungus might have problematic negative public health effects and unpredictable ripple impacts on ecosystems, affecting pollinators, bats, and bees. Like with all genetic engineering, this needs to be addressed with fantastic caution.”