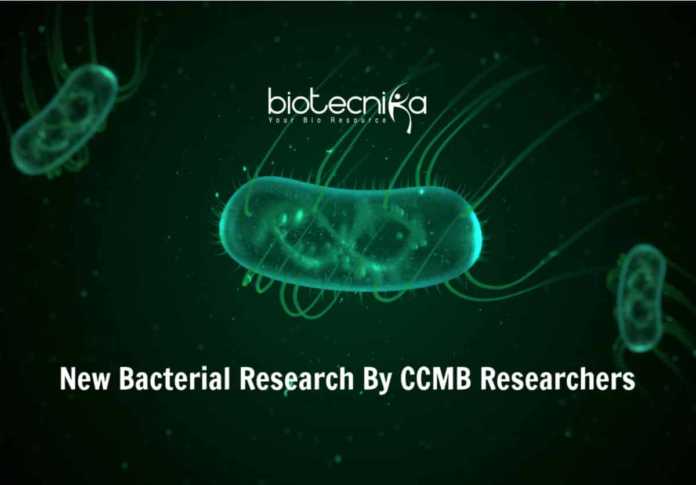 Researchers from The Centre for Cellular and Molecular Biology Hyderabad have identified an enzyme that plays a crucial role in the enlargement and growth of bacteria.

The enzyme MepK helps in cutting a particular class of bonds that connect the peptidoglycan, which is a sac-like molecule that envelops the cell. This action allows more material to be added to the cell wall, making a larger compartment for the cell to reside in.

One of the essential features of a bacterium is its cell wall, which protects it from external environmental conditions and also internal pressure and keeps it in shape.

The CCMB Bacteria Cell-Wall Development Research was carried out on E.coli, one of the most frequently used bacteria in research labs.

E. coli are rod-shaped bacteria. Once the cell wall of the bacteria is destroyed, the bacteria are incapable of surviving.

Scientists interested in developing new drug strategies to combat the bacteria often target the cell wall of the bacteria.

Manjula Reddy’s lab at CSIR-CCMB in Hyderabad understands how the bacterial cell wall develops during growth and division of cells. In earlier work, done in 2012, Dr. Reddy’s group showed that opening the cell wall by hydrolyzing enzymes is crucial for the new material to be incorporated into it, leading to the cell’s expansion and elongation.

The cell wall is made up of peptidoglycan. This consists of many sugar polymers interconnected by short peptides. It encloses the bacterial cytoplasmic membrane very much like a jute bag. The peptides connecting the baglike structure are cross-linked in several ways.

Scientists from CCMB have identified as an enzyme (MepK), which helps in breaking down the bond between two mDAP residues. This leads to cutting the molecular mesh and thus aiding the growth (or enlargement) of the cell.

Pavan Kumar Chodisetti, the first author of the paper, said that the class of enzymes reported by the scientists was not known earlier. He further added that this study has higher significance in organisms like Clostridia and M. tuberculosis because the cell walls of these bacteria have very high levels of the mDAP-mDAP type of cross-links.

These cross-links constitute approximately 10% of total cross-links in Gram-negative bacteria like E. coli and Pseudomonas. However, they are predominant in many Gram-positive bacteria, such as Mycobacteria and Clostridia.

According to Dr. Reddy, the next step will be to identify small-molecule inhibitors for this class of enzymes. The scientists are further interested in the molecular mechanisms by which the cell wall growth is initiated.