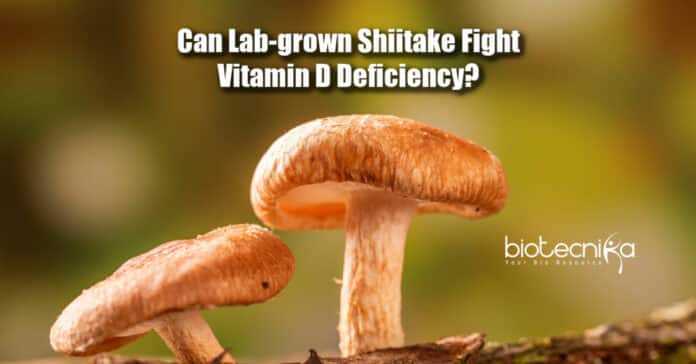 Scientists at CSIR-IHBT intend to conduct a human clinical trial to evaluate the benefit of lab-grown shiitake mushrooms in Vitamin D deficient people.

Researchers from CSIR-IHBT headed by Rakshak Kumar had developed a low-priced approach for growing shiitake mushrooms in the lab, allowing regional farmers to supplement their earnings.

Shiitake, a fragrant, large umbrella type of mushrooms native to East Asia, is primarily utilized in Japanese cuisine. According to the researchers, the popularity of shiitake mushrooms is increasing in India.

Shiitake mushrooms are costly as they grow in particular conditions on fallen tree logs. Although shiitake is currently produced in northeastern India, the team at CSIR-IHBT has developed a new technology that enables these mushrooms to grow much quicker in controlled lab settings.

Furthermore, the type grown by CSIR has higher levels of Vitamin D.

To determine whether the mushrooms can be used as a nutraceutical — a food or component of food that gives medical or health benefits — to boost vitamin D levels in people with vitamin D deficiency, the team headed by Rakshak Kumar is planning human trials to assess the benefit of a standardized (the preparation

must be such that each lot of the final nutraceutical product has the equal level of Vitamin D) shiitake mushroom soup on vitamin D levels.

Most jobs these days keep everyone indoors. Many people suffer from Vitamin D deficiency as a result of inadequate sunlight exposure.

Aman Thakur, a Ph.D. student in Kumar’s lab, stated that they want to see if these Vitamin D-enriched mushrooms can benefit people overcome this deficiency.

‘Trial by a third-party organization’

As per Thakur, at least 60 people will be selected for the trial and split into 3 categories.

The trial will last 4-6 weeks, after which the team will test the participants’ blood serum samples for Vitamin D levels.

The trial has yet to start; however, it will be presided over by a third party. According to Thakur, CSIR-IHBT will soon publish a tender to call a third-party organization for the same.

Thakur added that they would standardize the preparation of dried shiitake mushrooms, which will be utilized to make the soup before the trials.