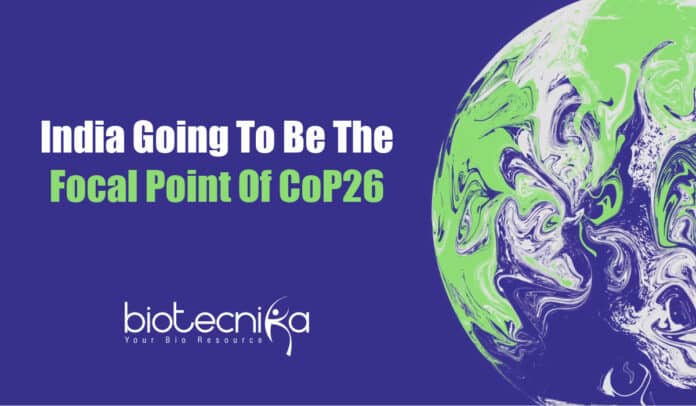 India Will Play The Central Role In CoP26 Summit

Narendra Modi, Prime Minister of India, representing the country is all prepared to attend the CoP26 (26th Conference of Parties) in Glasglow to set India’s vision for addressing the emerging risks of climate change.

The imminent conference in November (CoP26) will be a turning point for India since it is set to amend its 2030 climate objectives under the Paris Agreement. Presumably, the country is appraising an aspiring scheme of reducing the emission of greenhouse gases by nearly half the amount it releases for every dollar of economic activity.

With few days left for CoP26, the UN Climate Change Conference, the inter-ministerial sessions are discussing the NDCs (Nationally Determined Contributions). The key points of the conference revolve around cutting down emissions, expanding Renewable Energy Capacity, and thus elevating the share of non-fossil fuel reservoirs for generating energy.

To accomplish such an objective, the main plans are around the Urban Forest Programmes for afforestation of a minimum of 20 hectares throughout 200 cities, National Green Hydrogen Mission’s obligatory use by industry, transition to electronic sales of a minimum of 30% of all new vehicles, and decarbonization of Indian Railways.

of the country to date on key objectives, it is well equipped to accomplish key goals by the year 2030. For example, among the 450 GW mission for Renewable energy capacity, the country has already achieved 100 GW (aside from huge hydropower plants) by August 2021, another 50 GW project is already afoot, and a 27 GW project underbids. The current trends have been quite promising mainly because of the establishment of numerous space startups and increasing ESG investments, which eventually paves way for unique tech solutions lowering the expenses.

Nonetheless, there have been fields in which the country has been unsuccessfully in achieving the target, one such major area is the formation of extra carbon sinks of 2.5 to 3 billion tonnes of carbon dioxide equivalent, the rate of which dropped substantially as the government scheduled to open coal mines in woods in order to boost economic activities post-pandemic.

In this 26th conference (CoP26), the focus of the country is mainly going to be around 2 key areas- industry and electricity since they contribute to nearly 75% of overall CO2 emissions. Additionally, the spotlight will be the global grid declaration of the country, which is probably going to be acknowledged this time at Glasgow. International Solar Alliance (ISA) intends to release a declaration on the global electricity grid plan of India- OSOWOG ( One Sun One World One Grid). The united financial risk reduction facility, 2030’s $1 trillion solar investment design, and the global grid scheme are also anticipated to be considered for the imminent 4th general assembly being organized online between 18th to 21st October.

For developing nations such as India, an all-or-nothing issue will be if developed rich nations deliver on their expectations to make more money accessible for adaptation and mitigation. At the Paris Agreement in the year 2015, developed nations declared an oath to muster a minimum of $100 billion in climate finance each year by 2020, however, this still is not achieved.

Lately, there have been a few affirmative signs such as the US declaration at the General Assembly regarding its plan to raise its global climate finance to around $ 11.4 billion by the year 2024. At Glasgow for CoP26, nations such as India will be looking for discussion about a new financial target to apply past the year 2025, beginning from an amount of $100 billion annually. This amount is critical to support emission cutback in rich nations, however, also more significantly for many, measures to protect against and adjust to the most extreme climate change impacts.

During John Kerry’s (The special presidential envoy for climate) visit to the US and India, India set off CAFMD (Climate Action & Finance Mobilization Dialogue), one of the 2 key points of the 2030 US-India Agenda Partnership that India’s Prime Minister Modi and the US President Biden declared at the Leaders Summit On Climate in the month of April 2021.

Given the colossal impact that the country has on the worldwide economy, it can clearly be finalized that it is going to serve a crucial role in 2021’s Glasgow conference (CoP26) and the worldwide missions that are going to be discussed. Nonetheless, the country must carefully move ahead while defining aspiring objectives since it is still a developing nation and provided the current experiences of activities such as power shortages, with such missions in place there is not much that a country can do and the economy straightly encounters the aftermath of the same.