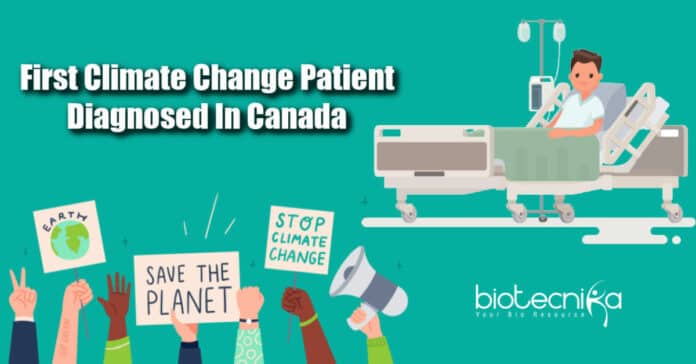 A doctor in Canada’s British Columbia province diagnosed a patient with breathing difficulties as being affected by “climate change,” probably the 1st such case to be documented.

According to Canada’s Times Colonist, the victim struggled to breathe after the recent wildfires in the Kootenays aggravated her asthma. As per the BC Wildfire Service site, the Kootenays region in British Columbia province has witnessed over 1,600 wildfires this financial year.

Dr. Kyle Merritt, who supervises the emergency room at Kootenay Lake Hospital, has witnessed many cases where the record heatwave intensified pre-existing health issues, including diabetes, heart failure, etc. Though, it is challenging to link fatality or critical illness to heat waves or air pollution. Dr. Merritt collaborated with other medical professionals in the neighboring provinces of Prince George, Kamloops, Vancouver, and Victoria to help treat the rising cases of heat illness, which he had only seen in medical school.

Many mortalities have been reported due to a heatwave that has broken Canadian heat records — Lytton, British Columbia, reported an all-time high temperature of 49.6 degrees Celsius on June 29.

When asked why he made the unusual diagnosis, Dr. Merritt stated that if

the underlying cause is not diagnosed correctly and only the symptoms are treated, everyone will fall further and further behind.

He further stated that he is just working to… process what he is seeing. They are in the ER, and they care for everyone, from the most honored to the most susceptible, from the cradle to the grave. And it’s difficult and disheartening to see people, particularly the most vulnerable members of society, suffering.

Dr. Merritt, who went on to form a group named Doctors and Nurses for Planetary Health, believes that his actions will inspire other doctors to make a more direct connection between their patients’ health and climate change.

The father of 3 said that the 3 weeks of summer, when the COVID-19 pandemic, a heatwave, wildfires, and air pollution all collided together, were tough.

The connection between public health and climate change is a hot topic at the COP26 summit. The UK is hosting a climate conference, and world leaders and technological titans have gathered to strengthen a global response to the warning of climate change. But, several of the deals and decisions have been criticized by activists as being insufficiently determined to make a significant impact.