According to Dr. Jitendra Singh, this is a pan-India program backed by the Department of Biotechnology that envisions Star Colleges in every district of India.

The plan calls for monthly workshops and meetings, as well as handholding at colleges, especially in rural or underserved regions, and carrying out outreach activities with government schools. 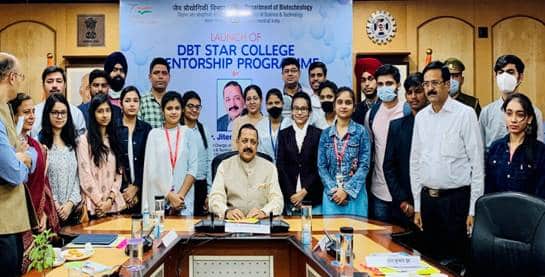 Dr. Singh stated that the Star Status Colleges would aid in implementing DBT’s vision of strengthening UG Science Courses across India. It will guide new colleges via handholding and peer education and bring them under the patronage of the Star College Scheme.

He stated that the DBT Star College Scheme is currently supporting 278 undergraduate colleges across India.

He expressed satisfaction that the scheme currently supports 55 colleges from rural areas and 15 colleges from aspirational districts in just 2 years.

He stated that over 1.5 lakh students have been supported in the last 5 years and that colleges participating in the Star College Scheme have received

extensive support. He noted that this support is not restricted to equipment procurement but also includes training for faculty and lab staff, talks by prominent scientists, visits to research institutes and industries, and so on. This sort of holistic support is expected to build a permissive setting for students to become motivated and pursue science education.

He stated that there is a necessity to focus on improving the number of beneficiaries in human resource-associated projects such as the Star College Scheme, the Skill Vigyan Programme in Biotech, BITP, and doctoral and post-doctoral and re-entry programs and Fellowships, among others.