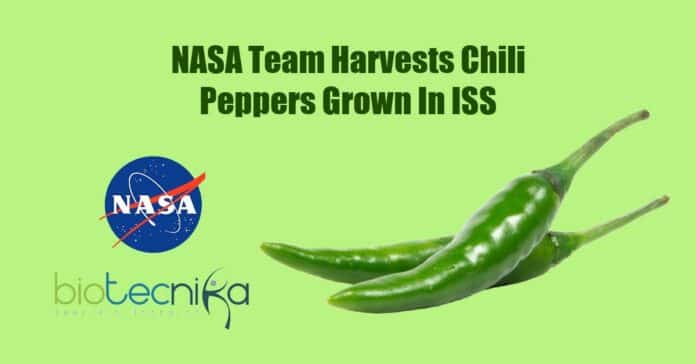 Supplying food to astronauts will be a significant challenge in the future when humans travel to space and expectedly land on Mars. The resupplying of food could take several months. The perilous space journey may present unexpected difficulties. Experts have been working on a solution to grow food in space.

In this regard, a significant step ahead has recently been made. Astronauts have grown the world’s first batch of chili peppers in zero gravity. Farming seems to be the most difficult task on an alien surface that has been inhospitable for millions of years.

In an effort to make this more hospitable, astronaut Mark T Vande Hei collected the 1st batch grown as part of the Plant Habitat-04 study, one of the most difficult experiments on the International Space Station.

Friday Feasting! After the harvest, we got to taste red and green chile. Then we filled out surveys (got to have the data! 😁). Finally, I made my best space tacos yet: fajita beef, rehydrated tomatoes & artichokes, and HATCH CHILE! https://t.co/pzvS5A6z5u pic.twitter.com/fJ8yLZuhZS

The astronauts ate some of the red and green chilies grown in space, while the rest will be returned to Earth for further study. NASA stated that as the plant had long germination and growing times, the experiment was one of the most difficult to date on the station.

NASA selected chili peppers for its research because they contain essential nutrients and are a good source of Vitamin C. Peppers are self-pollinating, making the fruits simple to cultivate. The only necessity is that – the plants have to be agitated.

NASA stated that chilies are simple to manage in microgravity and are a pick-and-eat crop that does not need cooking or difficult processing. It also has low microbial levels, making it suitable for astronaut consumption.

NASA added that while NASA’s earlier space crops took a notably longer period to mature, this type of peppers matures in a few months and has grown well in the confined space available inside the Advanced Plant Habitat during ground tests.

On the other hand, growing them was not easy, as scientists spent 2 years assessing over 2 dozen pepper varieties from across the globe to be cultivated in space. Hatch chili pepper, the generic name for many different varieties of green chili peppers grown in Hatch, New Mexico, was chosen by the agency as the best growing variety in the ground-based experiment.

NASA stated that this pepper grew best in ground experiments in the APH, adjusting well to regulated agriculture conditions and knocking out other Hatch pepper cultivars.

Researchers planted 48 pepper seeds in a tool known as a science carrier, which was filled with baked clay for root growth with a controlled-release fertilizer specifically made for peppers. This tool was then launched to the ISS aboard SpaceX’s 23rd cargo resupply mission and installed in the station’s plant habitat. The trial started on July 12, 2021, and has been observed by astronauts in space as well as botanists on Earth.

To assure that the flowers in orbit are pollinated, the team ran its fans at different speeds to generate a gentle breeze in microgravity, agitating the flowers and encouraging pollen transfer. While, hand pollination was also performed, which resulted in the development of chili flowers into fruits.

NASA stated that the team is investigating the psychological advantages of seeing, smelling, and caring for plants in isolated, closed-loop settings. Growing peppers in space could help them on Earth as well by showing the viability of using existing pepper varieties in controlled environment agriculture.