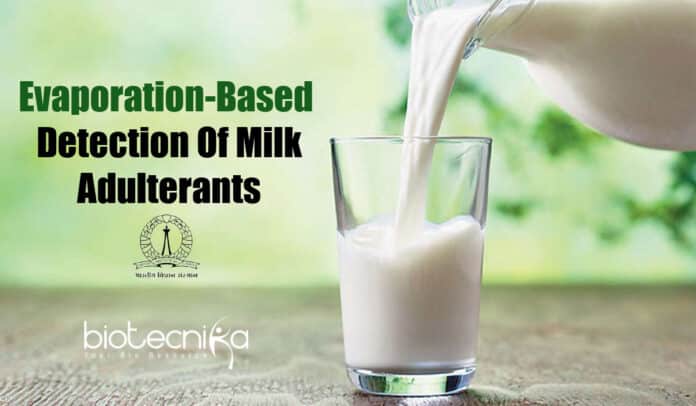 Scientists from IISc (Indian Institute of Science), Bengaluru have come up with an effective and cheap technique to detect adulterants present in milk, by simply examining the deposition patterns following evaporation. The group employed the novel strategy to track adulterants like water and urea, the most prevalent adulterants, and propose that the method can be used for other adulterants as well.

Milk adulteration is an exigent issue in developing nations such as India, where a major part of the distributed milk fails to follow the FSSAI (Food Safety & Standards Authority of India) standards. Water is mixed regularly to increase the quantity of milk, together with urea, enabling the mixture to be foamier and whiter- this can significantly jeopardize the normal function of kidneys, heart, and liver.

The evaporative pattern of the unadulterated milk consists of an irregular, central blob-like pattern

. Water was detected to induce the total loss of this unique pattern or distortion, based on the amount added. Additionally, urea erases the central pattern completely. Being a non-volatile compound, it doesn’t evaporate, but rather crystallizes, from the inside of the milk drop and extends along the sides.

Recent methods like lactometers check the shifts in the milk’s freezing point to detect water, however, these methods have some flaws. For example, the freezing point method can detect water just up to 3.5% of the overall milk concentration. Even though high sensitivity biosensors are currently accessible for testing urea, they are costly and their accuracy drops with time. On the other hand, the team from IISc found around 0.4% concentration of urea and 30% concentration of water in adulterated milk with an analysis of the pattern.

The evaporation-based detection method for adulterants was developed by IISc’s assistant professor, Susmita Dash, and postdoctoral researcher, Dr. Virkeshwar Kumar from the mechanical engineering department. Their findings have been published in the journal ACS Omega.

This method doesn’t need a lab or any other detailed process. Dr. Kumar stated that it can be carried out anywhere. It can is a very convenient and user-friendly method even for rural places and remote areas.

Dr. Dash and Dr. Kumar think that this low-cost method to trace adulterants can significantly be used to detect adulterants in other products and beverages as well. Dr. Dash claimed that the pattern is potentially distinct based on the adulterant mixed. Therefore, he believes this technique can be employed to assess impurities present in volatile liquids. He added that it will be great to employ this technique for other products like honey, which is commonly adulterated.

They found that this technique’s simplicity might even make it suitable for easy automation after the standardization of the adulterants’ patterns and combinations. These could be transferred to image analysis software, for instance, those that compare an image- even those taken using a mobile phone- of the evaporative pattern of the sample with other standard patterns to precisely find the adulterants.

Dr, Dash remarked that their subsequent step will be to detect adulterants like detergents and oil that form a milk-like emulsion. They intend to resume their work in the same path so as to create a pattern repository corresponding to different concentrations of various adulterants.