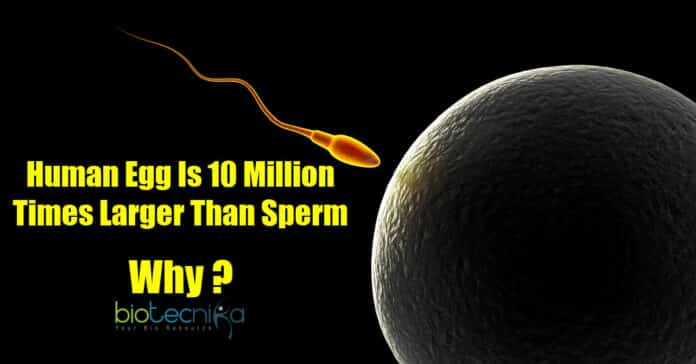 Egg cells are much bigger than sperm cells in most living animals. For instance, one human egg is 10 million times the volume of sperm.

Northwestern Engineering researchers discovered that this unusual size variance was a result of competition and natural selection.

The team used mathematical modeling to look at a time in evolution when primordial species multiplied through external fertilization. Larger reproductive cells, or gametes, had competitive leverage in the model as they can carry more nutrients for a potential zygote. On the other hand, smaller gametes needed fewer resources to make, putting less strain on the parent.

Daniel Abrams, professor of engineering sciences and applied mathematic, McCormick School of Engineering and the lead author of the study, stated that organisms needed to produce either the largest gametes with the most requirements or the smallest gametes with the fewest resources. Based on probable hypotheses about how sexual reproduction and natural selection work, they believe this size variation is almost unavoidable.

The research outcomes were released in Theoretical Biology. The paper’s other authors were Joseph Johnson, a Ph.D. student, Nathan White, and Alain Kangabire, from Abrams’ lab.

model developed by the team begins with isogamy, a primordial time in which all gametes were approximately the same size and different sexes did not yet exist. The researchers then created and tested an easy mathematical model to demonstrate how isogamy evolved into anisogamy, a state in which gametes became either very small or quite big — precursors to sperm and eggs linked with biological sexes presently.

According to the model, anisogamy arose as a result of competition for survival in a resource-constrained setting. Gametes were more likely to endure if they were larger than their neighbors, resulting in an “arms race” preferring bigger and bigger gametes. However, organisms cannot produce a large number of sex cells without requiring more and more resources themselves. But, they could save resources by producing a large number of tiny gametes.

One unsolved mystery, according to Abrams, is why some isogamous species still exist now. For instance, some algae and fungi reproduce asexually or with symmetrical mating patterns.

Abrams stated that there had been various hypotheses about how anisogamy evolved, dating all the way back to Charles Darwin. Evolutionary biology puzzles are challenging to solve as the study can be done only on existing species. It can’t be examined how they appeared billions of years ago. Mathematical models can provide novel perspicacity and understanding.

The National Science Foundation has backed this study – A Dynamical Model for the Origin of Anisogamy.