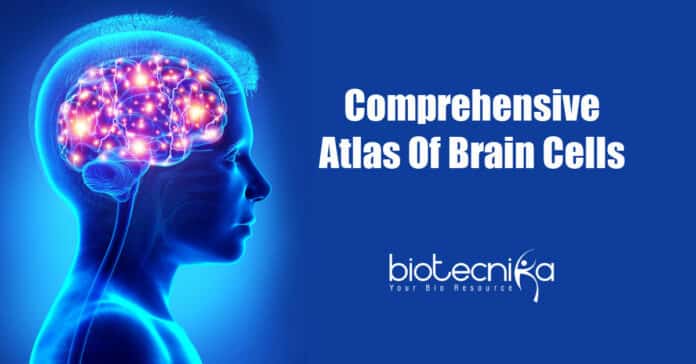 The moment you clicked on this article to read, a group of cells from your brain sent signals to your spine and hand, instructing the muscles in your finger to click with an appropriate pressure to stimulate your mousepad or trackpad.

A bunch of new research reveals that the primary motor cortex – the brain region accountable for initiating this action and controls movement contains as many as 116 diverse types of cells that collaborate to do this function.

The 17 studies, which were published online in the journal Nature, are the outcome of 5 years of effort by a large consortium of researchers backed by the NIH’s Brain Research Through Advancing Innovative Neurotechnologies Initiative to distinguish the numerous diverse cell types in one section of the brain. It is the initial step in a deep-rooted project to create an atlas of the whole brain cells to aid in understanding how the neural networks in our heads control our bodies and minds, as well as how they are disturbed in the event of mental and physical difficulties.

, and co-author of the lead paper that incorporates the outcomes of the other articles questioned that – If you believe that the brain is a remarkably complicated machine, how can we understand it without first splitting it down and knowing its parts? The front page of any manual on how the brain works should contain the following things: these are the cellular components, number of cellular components, where they are present, and where it is connected to.

Different scientists have earlier identified many cell types on the basis of their electrical properties, shape, size, and the genes that they express. The current researches identify approximately 5 times more cell types, although many of them are subtypes of known cell types, e.g, cells that release particular neurotransmitters, such as gamma-aminobutyric acid (GABA) or glutamate, have over a dozen subtypes that can be distinguished by electrical firing patterns and gene expression.

While the present papers focus solely on the motor cortex, the BRAIN Initiative Cell Census Network (BICCN), which was started in 2017, aims to map all of the various cell types found throughout the brain, which is composed of over 160 billion individual cells, both neurons, and glia cells.

Bateup stated that once all those parts are defined, the study can be taken to the next stage and start to understand how these parts work collectively, how they form functional circuits, how that eventually give rise to perception and behavior, and much more complicated stuff.

Ex UC Berkeley professor John Ngai, Bateup, and UC Berkeley colleague Dirk Hockemeyer have previously utilized CRISPR-Cas9 to produce mice with a particular cell type labeled with a fluorescent marker, enabling them to trace the connections these cells make in the brain. According to her, the Berkeley team created 2 strains of “knock-in” reporter mice for the lead paper, giving novel tools for elucidating the connections of the recently recognized cell types.

Ngai stated that one of the several constraints in developing efficient treatments for human brain disorders is that there is no clear understanding about which cells and connections are being affected by a certain disease and thus can not pinpoint with accuracy what and where to target. Comprehensive knowledge of the cells types in the brain and their characteristics will eventually allow the advancement of new treatments for neurologic and neuropsychiatric diseases.

A previous study by Bateup, Hockemeyer, and Ngai profiled all the active genes in single dopamine-producing cells in the mouse’s midbrain. The mice’s midbrain has structures comparable to human brains. Other BICCN researchers used the same profiling method to profile cells in the motor cortex, which includes identifying all of the particular mRNA molecules and their levels in each cell. This type of study, which employs a method called scRNA-seq, is known as transcriptomic.

The BICCN team practiced approximately a dozen different experimental techniques, out of which one was the scRNA-seq technique, to identify the various cell types in 3 distinct mammals: mice, marmosets, and humans. Four of these included various methods of identifying gene expression levels as well as ascertaining the genome’s chromatin architecture and DNA methylation status, which is referred to as the epigenome. Other techniques used included classical electrophysiological patch-clamp recordings to differentiate cells based on how they fire action potentials, classifying cells by shape, ascertaining connectivity, and examining the spatial position of cells within the brain. Many of them made use of machine learning or AI to differentiate cell types.

Hockemeyer stated that this is the most extensive description of these cell types, with high resolution and various methodologies. The outcome of this article is that there is a great deal of overlap and persistence in ascertaining cell types with these varied methods.

Sandrine Dudoit, professor at UC Berkeley and chair of the Dept of Statistics, stated that s group of statisticians consolidated data from all of these experimental techniques to ascertain the most reliable way to classify or group cells into various types and, possibly, diverse functions based on the observed differences in expression and epigenetic profiles between these cells. While there are several statistical algorithms for interpreting that data and identifying clusters, the hurdle was determining which clusters are really distinct from each other, absolutely distinct cell types.

Sandrine Dudoit and Elizabeth Purdom,  biostatistician and professor at the University of Berkeley, were pivotal members of the statistics team and co-authors of the lead paper.

Dudoit stated that the intention is not to create another new clustering technique but to discover a way to exploit the power of different methods and combination methods and to evaluate the stability of the outcomes and the reproducibility of the obtained clusters. “This is really the main message about all these researches looking for new cell types or new cell categories: no matter what algorithm you use, you’re going to get clusters, so it’s undoubtedly important to have real confidence in the outcomes.

According to Bateup, the number of individual cell types classified in the new study varied based on the method utilized, ranging from dozens to 116. Another finding in this study was that mice have 5 times diverse types of inhibitory neurons as excitatory neurons in this region of the brain, while humans have about twice.

Bateup stated that previously there were about 10 or 20 diverse cell types defined; however, it was not clear that if the cells defined depending on their gene expression patterns were the same as those determined based on their electrophysiological properties or same as the neuron types defined by their morphology.

Hockemeyer stated that the major advancement by the BICCN is that all the various ways of defining a cell type were linked and integrated to come up with a consensus taxonomy that isn’t just depending on gene expression or physiology or morphology but also all of those features are taken into consideration. Therefore, now it can be asserted that this specific cell type expresses these genes, has this structure, has these physiological characteristics, and is positioned in this specific region of the cortex. As a result, a much more detailed knowledge of what that cell type is and its basic characteristics are achieved.

Dudoit alerted that prospective researches could determine that the number of cell types identified in the motor cortex is overestimated, although the prevailing researches are a great start toward creating a cell atlas of the entire brain.

She further stated that even among biologists, there are very divergent views about how much resolution you should have for this system, if there’s a very fine clustering structure, or if you actually have more stable higher-order cell types that are more stable. However, these results show the strength of collaboration and bringing together efforts from various groups. The study began with a biological problem, but a biologist alone cannot solve it. To tackle such a significant and difficult problem, there was a need for experts from several different disciplines who could communicate well and cooperate well with each other.

Download the Biotecnika app, to read more interesting happenings from the world of Bioscience.

Check out the Biotecnika Stores