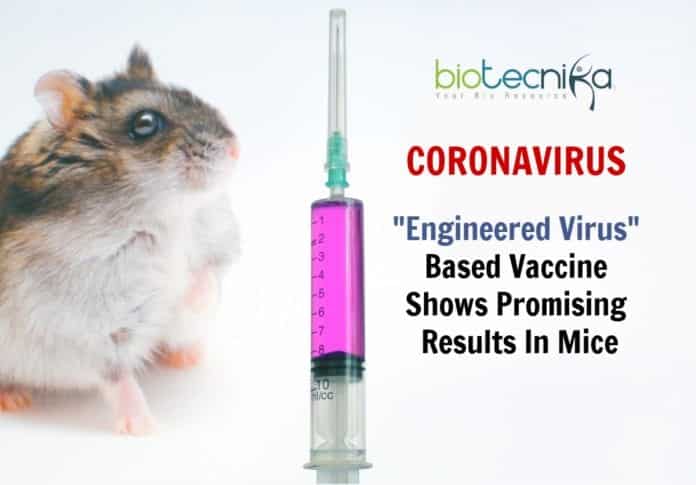 While the novel coronavirus SARS-CoV-2 is spreading across the world, infecting more than one million people, the fact that no vaccines exist against any of the coronaviruses including the SARS, MERS and the novel one is creating fear among the people. Many labs around the world are focusing on understanding the new virus and finding the best strategies to contain its spread.

A promising vaccine candidate against the MERS has been developed by a team of interdisciplinary researchers and published the results in mBio, a journal of the American Society of Microbiology.

The MERS outbreak occurred in 2012, killing more than 850 people with a fatality rate of more than 30%. The team of scientists suggests in this paper that the strategy they used to develop the vaccine for MERS can be used for SARS-CoV-2 also.

The scientists used an RNA virus called parainfluenza virus 5 (PIV5) to deliver the vaccine. The virus is believed to develop a condition called Kennek cough in dogs but is harmless to humans. Scientists added an extra gene to the PIV5 virus, that will produce the spike protein (S) involved in MERS in the infected cells

McCray developed a mouse model that mimics human infections to test the vaccine, as MERS virus cannot replicate in normal mice. DPP4, a protein used by the MERS to attack human cells was engineered into the mice.

A single dose of the vaccine introduced to the mice intranasally effectively caused the infected cells to produce the MERS spike protein, which in turn triggered the immune response against MERS in the mice.

The mice were exposed to a strain of MERS virus, four weeks after they received the vaccine. Other groups of mice that received a different PIV5 vaccine that lacked S gene or that received an intramuscular vaccine with inactivated MERS virus were also simultaneously exposed to the MERS virus.

All the mice that received PIV5 vaccine engineered with S protein survived the infection while all other mice groups died from the MERS infection. The inactivated MERS virus injected intramuscularly protected only 25% of mice from the deadly infection. Also, the inactivated virus caused an increase in eosinophils to an above-average level. This could be an indication of infection or inflammation, raising the safety concern of inactivated MERS virus as a potential vaccine.

McCray said he is quite interested in using viruses as gene delivery vehicles. He has developed some similar strategies to treat cystic fibrosis.

Developing an effective vaccine against the COVID-19 is a race against time. Not all people in the world are going to get the infection this time. So when the virus comes again, there will be more people to infect. And it’s not still confirmed if people get long-lasting immunity from the novel coronavirus infection. So it’s important to think about ways to protect the population, said McCray.