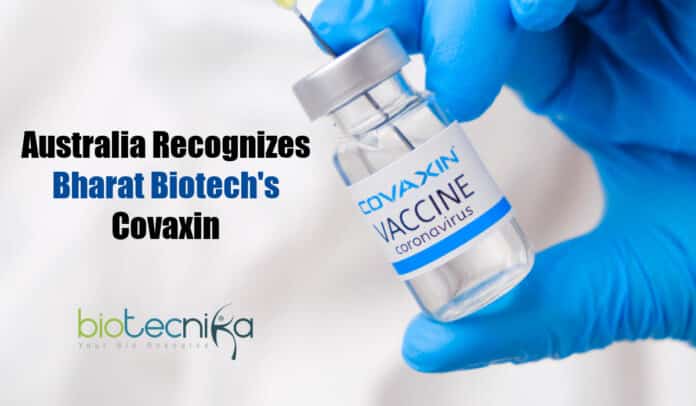 Australia has finally accepted the first indigenously produced Bharat Biotech’s Covaxin as an approved Covid-19 vaccine for all immigrants aged 12 & above.

This judgment comes as a tremendous boost for the Indian pharma firm, Bharat Biotech as it expects consent from the WHO (World Health Organization). Australia has already authorized Covishield, developed by AstraZeneca for traveling by October 2021.

Based on a report on Monday by Australia’s Department of Health, this will have a substantial effect on the travel of unskilled & skilled workers and the return of international students to Australia.

While Bharat Biotech’s Covaxin is still awaiting WHO sanction and is not accepted by many nations, including the UK and the US, India has succeeded in acquiring mutual agreement with around a dozen countries to allow the immigration of Indians vaccinated by Covaxin. So far, Bharat Biotech’s Covaxin has been approved for travel in the Philippines, Mexico, Zimbabwe, Greece, Mauritius, Iran, Sri Lanka, and Nepal.

I thank my dear friend @ScottMorrisonMP for Australia’s recognition of India’s COVAXIN. It is an important step forward in the post-COVID partnership between 🇮🇳 and 🇦🇺.

The MEA (Ministry of External Affairs) is in negotiations with many others, including European countries, for mutual consent of vaccine certifications, such that WHO approval stops being an obligatory condition. One similar agreement has already been signed between Hungary and India, by October 2021 and the government is expecting greater success in the future.

BBIBP-CorV, developed by China’s Sinopharm was also approved by the TGA (Therapeutic Goods Administration), a healthy regulatory organization in Australia for immigrants aged between 18 & 60.

The statement disclosed that recently, TGA has acquired extra details showing the efficiency of these vaccines in protecting & potentially lowering the chance of Covid-19 transmission from an immigrant to a healthy individual or becoming terminally ill due to infection. The additional data has been submitted to the TGA from the WHO and/or vaccine sponsor.

The statement added that the acceptance of BBIBP-CorV & Covaxin, together with previously accepted Covishield (produced by India’s AstraZeneca) and Coronavac (produced by China’s Sinovac), infers that numerous citizens of India and China, as well as other countries widely deploying these vaccines, will now be recognized as completely vaccinated on entering Australia.

Additionally, Australia has decided that people who received two TGA-recognized or approved vaccine doses at least 14 days apart would be considered as completely vaccinated from a week after the 2nd shot (For the Janssen vaccine, people are considered fully vaccinated a week followed by the 1st shot).

Also, from 01/11/2021, vaccinated permanent residents and Australians aged 12 and above would be permitted to travel outside the country without requesting travel exemption.