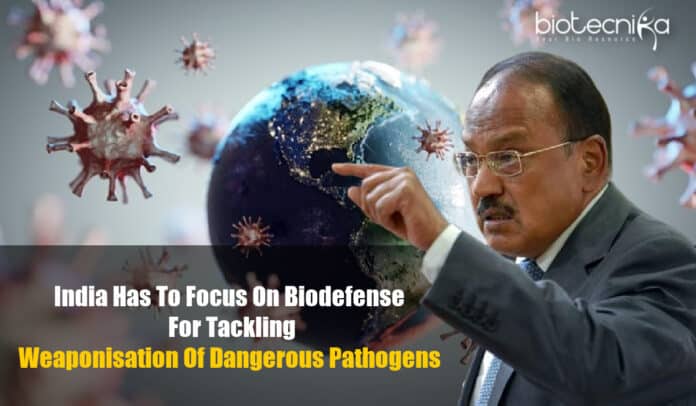 Ajit Doval, NSA (National Security Advisor) on October 28th stated that the deliberate weaponisation of dangerous pathogens was a pressing issue and summoned for the requirement to develop extensive national potentials-bio-security, bio-safety, and bio-defense. Emphasizing the concern over the climate change issues, he claimed that pandemics and disasters are borderless threats that can’t be fought in isolation and there was a necessity to develop approaches to minimize the losses and maximize their gains. While talking at the PDNS 2021(Pune Dialogue on National Security) on ‘National Security Preparedness In The Age Of Disasters & Pandemics’ organized by the PIC (Pune International Centre), Doval mentioned that the key point of climate change and Covid-19 pandemic is the overall well-being of all so as to assure the survival of all.

India’s NSA asserted that the Covid-19 pandemic has additionally heightened the necessity to predict dangers. Even though biological studies have valid scientific intentions, its dual-purpose application could be exploited. While expressing climate change issues, Doval remarked that it is another risk that can become dangerous with unpredictable repercussions.

He expressed that it affects resource availability, which is now becoming more scarce and could transform

into a source of conflict rather than competition. Climate variations can expedite instability and induce colossal displacement of the population. NSA Ajit Doval added that multitudes of Indians are expected to shift to urban regions. Relocation from South Asia’s low-lying coastal regions because of weather changes can intensify the already exigent urban infrastructure. Also, all of these jeopardize food, water, & economic security, internal security management, just to name some.

He said that according to the environmental and national security concerns, there is a demand to innovate and reinvent as rapid industrialization is happening with 4th industrial revolution technologies like digital infrastructures, unmanned & autonomous systems, and AI. Based on Doval’s statement, the complexity of national security management is enhanced by social media. He commented that all aspects of developments in security and complete integration of technology & science have hence become necessary. Developments in technology & science will help in preventing hazards. Risk communication techniques, lab prediction technology, and advanced technologies are being employed to minimize the risk.

Based on the NSA’s report, the country has commenced many initiatives for regional and global coordination. Technology coordination & transfer, sharing lessons learned & experiences, seamless exchange of intelligence & information, and Forums like QUAD, Shanghai Cooperation Organization, Indian Ocean Rim Associations, and BIMSTEC are crucial for disaster mitigation and management.

Doval, the NSA noted that pollution, environmental degradation, and climate change are realities that endanger survival. He told that security gears and businesses have to concentrate on preserving natural resources and disaster-resilient structures for the upcoming generations. Also, decisions about securing advanced alert systems, assuring the smooth supply of important materials & equipment & its availability, and maintaining deliberate national stockpiles have all become crucial components of national security planning.

Doval, India’s NSA stated that one of the major climate change conferences is about to happen in early November at Glasgow. India is devoted to meeting its climatic objectives and has already launched numerous initiatives. A balance with nature has been a keystone of Indian civilization. Environmental preservation, while discerning its aspiring objectives is a leading notion of the current development policies of the government.

India’s NSA expressed that the per-capita greenhouse emission of India is 2.47 tonnes of CO2 with its population reaching 1,300 million. When compared with the worldwide average of 6.45 tonnes of carbon dioxide, it is 60% lower than the worldwide average. They have already met 50% of their promise to accomplish 450 GW renewable energy by the year 2030. A set of initiatives are being launched to decarbonize the economy of India. These goals have been widely endorsed at the international level. Concurrently, as Indians are undertaking all the crucial steps for people to know that provided their unique developmental requirements, population & size, their targets can’t be compared with those of the other countries. Those having substantial resources must expand their support such that it influences the lives of as many people as possible.