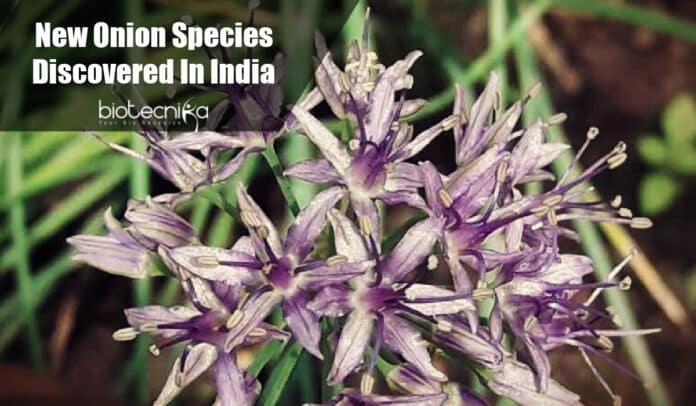 Allium is a broad genus within the herbaceous family known as Amaryllidaceae, primarily bulbous and perennial flowering plants.

This genus has around 1,100 worldwide species, including chives, shallot, scallion, garlic, onion, and can be found naturally during dry seasons in South Africa and the northern hemisphere.

Irano-Turanian bio-geographical area is the genus’ main evolution center. The secondary diversity centers are considered to be western North America and the Mediterranean basin.

The Allium genus in India has about 35-40 species, 22 sections, and 10 subgenera, excluding grown ones present in various eco-geographical sectors of the alpine and temperate areas of Himalayas, with several species of Chinese origin.

The Himalayas in India have two marked Allium diversity centers, the eastern Himalaya (6%) and the western Himalaya (around 85% out of total), including the alpine-sub temperate area.

The principal scientist at ICAR NBPGR (National Bureau of Plant Genetic Resources) along with S Rajkumar, Pavan Kumar Malav, and Dr. K Madhav Rai while researching systematic botany of the Indian Allium genus in the year 2019, came across this new species.

Dr. Anjula Pandey, the first author of the paper who is working at ICAR-NBPGR along with her teammates stated that Allium negianum can be grown at heights above sea level around 3000-4800m and can be spotted specifically in alpine meadows along streams in snow pasture areas, river’s sandy soils, and open grassy meadows.

Dr. Kuldeep Singh Negi, an Indian Allium collector and an eminent explorer is honored for the particular name ‘Allium negianum‘.

Even though this is new to science, this newly identified species has been familiar to native people for a long time.

The researchers mentioned that they recognize local names of seasoning onions like kacho, sungdung, sakua, jambu, and phran.

They further added that based on the natives’ statements, the species from Niti valley was specifically good, and even was rated the finest in the market.

As the new onion species, Allium negianum is restricted to the western regions of Himalayas, it may be under pressure since people are waiting to savor it.

They additionally mentioned that they are concerned about the threat to the wild population of onions due to the random harvest of the new onion bulbs and leaves for seasoning.

The findings are published in the journal PhytoKeys.