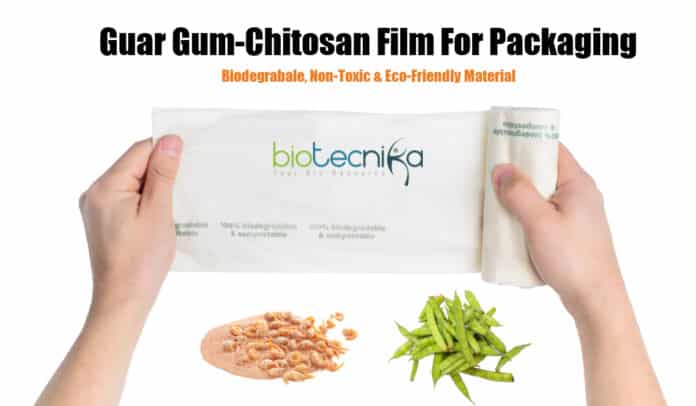 The Ministry of Science & Technology announced that an elite group of researchers from India has devised a biodegradable, non-toxic, eco-friendly polymer with chitosan & guar gum. The developed guar gum-chitosan film has excellent resistance to severe environmental conditions, high mechanical strength, and high water stability, making them a potential material for packaging.

Guaran or guar gum is a galactomannan polysaccharide derived from a vegetable known as guar beans. This polysaccharide has excellent stabilizing and thickening properties which are beneficial for industrial, feed, and food applications. It is easily accessible and is derived from the guar seed’s endosperm. These seeds are mechanically screened, milled, hydrated, and dehusked based on the need. Moreover, the biopolymer extracted from gaur gum is extensively used in the industrial sector because of its renewability.

Chitosan, on the other hand, is a linear polysaccharide produced by processing chitin shells of crustaceans like shrimp using alkali like NaOH (Sodium Hydroxide). Chitin is generally present in some hard structures in fish & invertebrates, fungi’s cell walls, and insects’ exoskeleton.

one of the 2nd most accessible polysaccharides amongst other naturally present ones. This polymer even has excellent use in packaging because of its eco-friendly, biodegradable, and non-toxic nature.

Polysaccharide is a promising biopolymer with numerous applications during the manufacture of packaging materials. Nonetheless, because of polysaccharides’ flaws like low barrier properties, high water-solubility, and low mechanical properties, they are not considered the best.

Sazzadur Rahman, an Inspire JRF (Junior Research Fellow), and Dr. Devasish Chowdhury, an associate professor from IASST (Institute of Advanced Study in Science & Technology), Guwahati developed a guar gum-chitosan composite film to address these issues posed by polysaccharides. This cross-linked polysaccharide is developed by following a process known as solution casting (an easy method for making polymer films) without employing any plasticizer. Plasticizers are polymers with low molecular weight which can improve the spacing between crystalline polymer chains in order to make them more tougher and flexible. Publication associated with this study is present in the ‘Carbohydrate Polymer Technologies & Applications’ journal.

Scientists discovered that the developed crosslinked biopolymer film was insoluble in water even after 10 days. Apart from that, the film’s mechanical strength was comparatively high than general biopolymer. Biopolymers are generally poor in these properties. Because of the high contact angle (92.8º), the biopolymer film was additionally hydrophobic or highly water repellent because of its high. It had a comparatively low water vapor permeability than the chitosan-derived film.

The resistance to severe conditions of the environment, water repellent attributes, and superior mechanical strength of the developed guar gum-chitosan films have a high potential for packaging purposes.