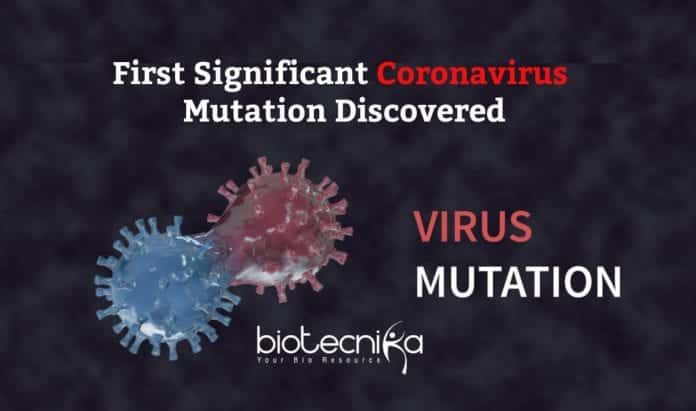 In a preliminary study, scientists believe they have found the first significant mutation of the coronavirus which causes the Covid-19 infection. However, the efforts of creating a vaccine to prevent Covid-19 is unlikely to get jeopardized by the findings, said the experts.

From a database, the genetic make-up of 106 samples of SARS-CoV-2, the virus that causes Covid-19, was examined by the authors of the study.

These samples were compared with 39 genome sequences of SARS, the virus which started an outbreak in 2002 and triggers severe acute respiratory syndrome (SARS). The data of SARS-CoV-2, which is almost complete, consisted of 54 records from the US, 35 from China, one record each from Sweden, South Korea, Nepal, Italy, India, Finland, and Australia, and three from Spain.

The findings have not undergone the rigorous peer review process required to publish in scientific journals as the team published their findings on the website bioRxiv.

The Covid-19 virus, Sars-CoV-2, was found to have much lower genetic diversity a

nd mutation rate than the SARS virus during the outbreak in 2002 and 2003.

The researchers wrote, “Less mutation of the virus raises the hope of the rapid development of a valid vaccine and antiviral drugs, thus a relatively stable genome of SARS-CoV-2 is a good indication for the epidemic control.”

For instance, the virus is able to attach to human cells by the gene that codes for the Covid-19 virus’ spike protein, and this gene largely stayed the same.

On January 27, 2020, the “first evidence” of a “significant” mutation of SARS-CoV-2 was seen in an analysis of one sample collected in India. The mutation appeared to make the virus less able to bind to ACE2, a receptor on human cells.

This finding raises the alarm that if more mutations were identified, the ongoing vaccine development may become futile in the future epidemics, said the researchers.

The research team, commenting on their results as a whole, wrote: “The evolution and mutation dynamics of SARS-CoV-2 still needs to be monitored closely, as the virus continues to spread rapidly around the world, and more genomic data is accumulated.”

They said, “We also proved that novel mutation with varied immune characteristics and virulence have already emerged, though we confirmed that SARS-CoV-2 has a relatively low mutation rate.”

At the University of Sussex, a lecturer in immunology, Jenna Macciochi, who did not work on the study said, “I don’t think this [the study] tells us much although, to monitor the pandemic, it is an important aspect of the virology of this pandemic.”

He explained, “When any virus enters a new host, it will have a period of adaptation. SARS-CoV-2 has less selective pressure for it to mutate dramatically as it is spreading with relative ease. With any virus, small mutations would be expected. In this report, the emerged mutation appears to reduce binding to ACE2, which could potentially mean less ability to infect due to less virulence. However, this does not necessarily mean vaccine attempts are futile as this is an isolated report.”

Upon asking if the findings have implications for creating a vaccine, Macciochi said,
“The s-protein [spike] is the target of many vaccines and the virus seems to have a lower mutation rate particularly s-protein, according to the study. This is reassuring that this is a good target for vaccines. However, whether the changes reported would change the ability of protective antibodies against spike to be redundant is still unknown.”

Macciochi argued that the significance of the findings is limited by the fact the study was not peer-reviewed and involved a small sample. Moreover, it would be useful to see how the new strain affected the severity of the disease after the data from the new strain was collected at the end of January in India.

Professor of virology at the U.K.’s University of Reading, Ian Jones, who also did not work on the study said, “There has been no obvious selection of distinct variants as the analysis of the virus to date has shown a sporadic set of mutations as expected of RNA viruses, including coronaviruses.”

“The key part of the virus required for vaccine design has not changed, thus in the future, the vaccine and therapeutics tested now should be equally applicable.”

Except for Antarctica, the virus has spread to every continent as seen in the Statista map below.

Around the world, more the 1.9 million COVID-19 cases have been confirmed with nearly 465,000 people recovered and almost 121,000 people dead, according to Johns Hopkins University.