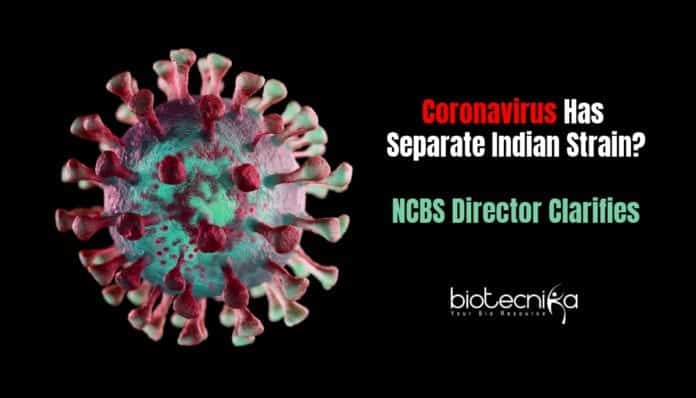 Different Strain of Coronavirus in India – Is it Possible?

To understand the novel coronavirus better, the National Center for Biological Sciences (NCBS) and the Indian Council of Medical Research (ICMR) are working together, and the Director of the Bangalore-based NCBS Satyajit Mayor has said that there is not enough scientific evidence yet to indicate that the novel coronavirus or COVID-19 has a separate Indian strain.

While Talking to The Hindu He said, “The implications that can be got from this virus is that this has occurred due to a random mutation where humans are more prone and there is reasonable evidence that this could be a zoonotic intrusion. It is unlikely yet that this is a different strain from those in other countries like Italy, the US and China.”

ICMR had released the sequences and the NCBS was studying information on it. He added, “There is a lot of research that we can do here ( on the strain in India) as viruses are known to mutate quickly. We need to be aware of this virus’s impact in India, as it is not possible to bottle up a virus like this.”

He noted, “We can effectively slow this virus down

though we cannot prevent the spread of such a virus. In these 40 days, from the experience from other countries, we can learn a lot and we will be able to cope with the outbreak if we can slow its spread and flatten the curve.”

Among the authors of a US Department of Defence funded study on Filovirus (of which Ebola is a member) in Nagaland, Shi Zhengli is also one among them. As two of the 12 researchers of the study were from the Wuhan Institute of Virology’s (WIV) Department of Emerging Infectious Diseases, the study came under the scanner recently as it was also funded by the U.S. Department of Defense’s Threat Reduction Agency (DTRA).

In the Nagaland study, Mr. Mayor maintained that the WIV was not directly involved in it and that only because they supplied reagents, they were listed as co-authors.

In understanding the SARS-family, the study of bats was a vital link. He said, “Bats carry so many viruses without getting sick and thus they are an interesting mammal to study. Hence, in their study, the technology, idea, and the basic concept remain the same.”

Reacting to the lawsuit, Mr. Mayor said, ” To show this was a bioweapon of any kind, there has been little to no evidence so far.”

It is also a partly man-made problem, he added. He said, “Unpredictable behavior by nature is understandable with human intrusion in global warming, climate change, and forest habitat. In this crisis, we as a species are not innocent.”