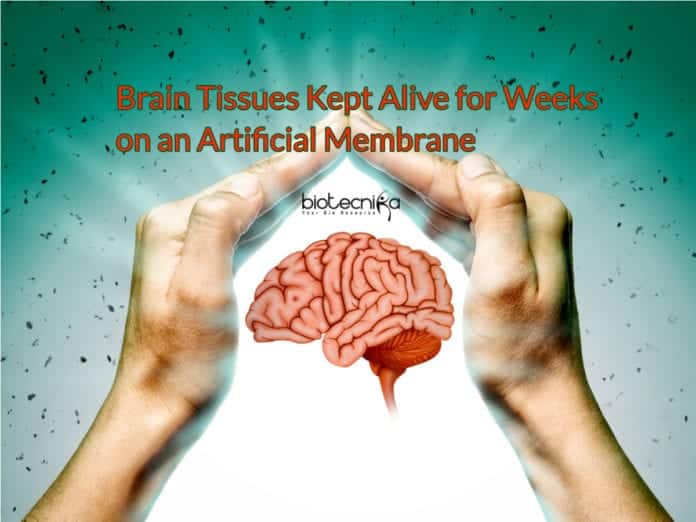 Brain Tissues Kept Alive for Weeks on an Artificial Membrane

A newly developed microfluidic device allowed scientists to keep the brain tissue from the suprachiasmatic nucleus alive for over 25 days.

Scientists at the RIKEN Center for Biosystems Dynamics Research in Japan have now developed a new system for keeping tissues viable for long term research study once transferred from an animal to a culture medium. This new system uses a microfluidic device that can keep tissues from both drying out & from drowning in fluid. A proof-of-concept experiment on this showed that the tissue explanted from the mouse brain remained viable after almost a month in culture, much longer than is possible with other microfluidic culturing methods, & also much simpler.

Experimenting on the tissues in culture can facilitate drug discovery because scientists can systematically manipulate the tissues and also test different drugs or drug combinations. While studying a whole system in which many cells must actually interact with each other, it was proven difficult to keep the tissues “alive” for more than a few days. Tissue dries out quickly and it dies unless it is put into a wet-culture medium with appropriate nutrients. And on the other hand, immersing complex tissue in the fluid can damage the tissues because it doesn’t allow the normal transfer of gases between them.

To solve this problem, the RIKEN researchers developed a microfluidic device using polydimethylsiloxane, the material often used as a defoamer in over-the-counter drugs. This device has a semi-permeable channel surrounded by an artificial membrane & solid PDMS walls. Rather than constantly being immersed in a fluid, the tissues benefited from having the culture medium circulate within the microchannel & pass through the permeable membrane, which allowed proper gas exchange. This sounds very simple, but finding the optimal settings proved challenging. As the first author, Nobutoshi Ota noted that controlling the medium flow was difficult because the microchannel that formed between PDMS walls & the porous membrane was unusual. However, the team had success after trial and error modifications to the porous membrane & adjustments of the inlet/outlet flow rates, he added.

The research team tested the device using tissue from the mouse suprachiasmatic nucleus which is a complex part of the brain that governs the circadian rhythms. The mice themselves were the knock-in mice in which the circadian rhythm activity in the brain was linked to the production of a highly-fluorescent protein. And by measuring the level of bioluminescence coming from the brain tissues, the team was able to see that tissues kept alive by their system stayed active & functional for over 25 days with nice circadian activity. And in contrast, the neural activity in tissue kept in a conventional culture decreased by about 6% after only 10 hours.

This new method will definitely have several benefits. In the short-term, a new system will be useful in observing biological development & testing how tissues actually respond to drugs. The long-term benefits of this are also clear. Ota added that the method can be used for more than explanted tissues from animals. It will also improve research studies into organogenesis through long-term culturing & observation which is necessary for growing tissue & organs.

Indeed, the research team is currently planning long-term studies and experiments using their system to observe the formation of blood vessels & the movements of cells during organoid formation.

This research study was published in the journal Analytical Sciences.