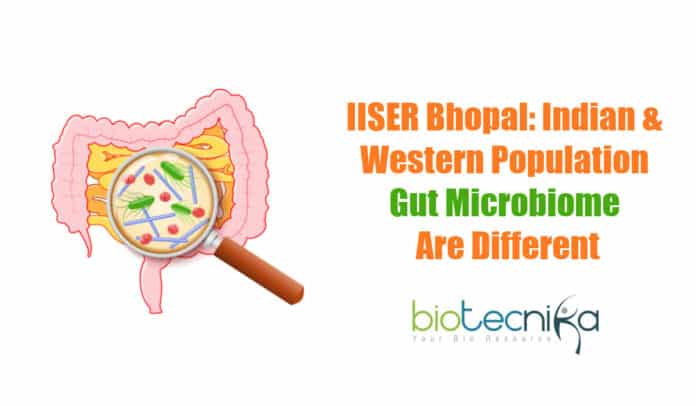 Scientists from Bhopal’s IISER (Indian Institute of Science Education and Research) have indicated the difference between Western & Indian populations’ gut bacteria types. These differences occur due to the variations in the region-wise food & diet patterns- The western diet being poor in fibre & carbohydrates compared to the Indian diet.

Associate professor from the IISER’s Department of Biological Sciences, Dr. Vineet K. Sharma together with his team from America’s SDSU (South Dakota State University) has explained the association of inflammatory conditions like IBS (Irritable Bowel Syndrome) and gut bacteria.

for survival. These bacteria safeguard us from infections, sometimes produce essential neurochemicals & vitamins, and facilitate easy digestion. In the year 2011, German researchers grouped humans into 3 enterotypes- Ruminococcus, Bacteroides, Prevotella- based on the type of bacteria dominating the gut microbiota.

Emphasizing the novelty of his study, Dr. Sharma claimed that most enterotype studies haven’t studied the correlation between the diet type & dominant gut bacteria type and are mainly focused on the Western population. IISER researchers carried out bacterial profiling of gut samples for India’s biggest gut metagenome study. 200 samples were collected from people all over India- Kerala, Bihar, Maharashtra, Rajasthan, Delhi-NCR, and Madhya Pradesh.

Scientists identified that the bacteria belonging to the Prevotella genus, specifically Prevotella copri species dominated the Indian gut microbiome. The gut microbiome of people who follow fibre & carbohydrate-rich diets like Tanzanians, Peruvians, Madagascarians, and Italians showed dominance in this bacterium as well. On the other hand, Bacteroides are found abundant in the gut microbiota of people from Western nations such as the USA.

In order to clearly understand the function of the Prevotella bacteria type, scientists carried out genomic studies and discovered that the bacteria have distinct regions or loci in their genomes that are accountable for breaking down complex fibres & plant carbohydrates. Hence, it is reasonable for the abundance of this kind of bacteria in the gut microbiome of healthy non-western & Indian populations that follow a diet pattern rich in fibres and plant carbohydrates.

The main author elucidated that this is a trailblazing study that revealed the importance of Prevotella species in the metabolism of complex dietary fibres & polysaccharides in non-western populations and explored the function of Prevotella copri on the health of humans from different populations.

Another interesting find was that P. nigrescens & P. intermedia, other Prevotella species were observed in the Western population guts. These bacteria are generally observed in the mouth, which highlights the mouth-gut axis. These bacterial species have high antibiotic resistance & virulence genes as well as are inflammatory. The increased susceptibility of the Western population to gut inflammatory conditions are primarily due to these species.

While discussing the practical significance of his study, Dr. Sharma stated that their findings would help in the development of new prebiotics & probiotics for various health-associated conditions related to the gut which is crucial for non-western populations.