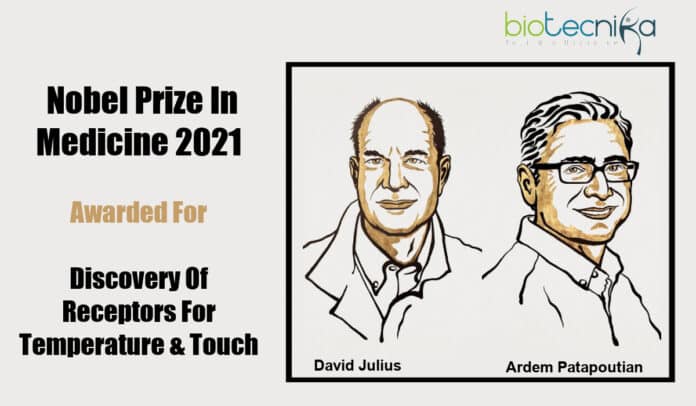 The Nobel Prize in Medicine or Physiology 2021

Ardem Patapoutian & David Julius was awarded the 2021 Nobel Prize in Medicine or Physiology at Karolinka Institutet by the Nobel Assembly for their breakthrough discovery of receptors for touch & temperature.

Our competence to sense touch, cold, and heat promotes our connection with the surrounding world and is crucial for survival. These sensations are usually taken for granted by people, however, the intriguing thing is the mechanism behind the nerve impulses. How is it initiated such that pressure & temperature can be sensed? This year’s Nobel laureates successfully resolved this puzzle.

To find a heat-responding sensor within the skin’s nerve endings, David Julius employed a pungent ingredient from chili peppers known as capsaicin. Ardem Patapoutian, on the other hand, employed pressure-sensitive cells to find a new class of sensors that react to mechanical stimuli in the internal organs & skin. These scientific findings initiated intense explorations resulting in a sudden increase in our conception of the mechanism of our nervous system – the way it senses mechanical stimuli, cold, and heat. The Nobel prize winners were able to bridge the gap in our understanding of the complex interactions between the environment

How do we perceive the world?

One of the major puzzles pondered by humanity is the mechanism behind our ability to sense the environment. This ability of our senses has provoked our inquisitiveness for several years, for instance, how various chemical substances interact with our mouth’s & nose’s receptors enabling us to taste & smell, how our inner ears are affected by the sound waves, and how eyes can detect light.

We even have other means to sense the environment around us. Consider yourself taking a stroll across a lawn on a scorching day. You can sense the grass under your feet, the wind’s caress, and the sun’s heat. These perceptions of movement, touch, and temperature are crucial for our adaptation to the continuously altering environment.

In the 1700s, René Descartes, a philosopher proposed that various parts of the skin are connected to the brain by threads. This explained how our feet respond to an open flame by sending a mechanical signal to our brain (Figure 1). Further studies showed the existence of particular sensory neurons that records the alterations in our surroundings. The 1944 Nobel Prize in Medicine or Physiology was won by Herbert Gasser & Joseph Erlanger for their finding regarding various kinds of sensory nerve fibers that respond to unique stimuli, for instance, the reactions to non-painful & painful touch. From that time, it has been shown that neurons are specialized for transducing and sensing various kinds of stimuli, enabling a nuanced perception of our environment; for instance, our ability to recognize painful heat & pleasing warmth, or our potential to perceive the dissimilarities in the surfaces’ texture using our fingertips.

Before Ardem Patapoutian’s & David Julius’s findings, our conception of the nervous system’s mechanism regarding the interpretation and perception of our surroundings still has a basic unanswered question: how are mechanical stimuli & temperature transformed into electrical signals or impulses within the nervous system?

The science heats up!

By the end of the 1990s, David Julius, a physiologist at UCSF (University of California, San Francisco), saw the prospect for crucial advances by examining how capsaicin (chemical compound) gives us the burning sensation when we touch chili peppers. This compound was already known to trigger neurons responsible for pain sensations, however, how this compound exerted this function was an unanswered question. Julius along with his colleagues developed a library with several DNA fragments corresponding to the genes that are translated in the sensory neurons that can respond to touch, heat, and pain. Julius and his coworkers proposed that the library would consist of a DNA fragment encoding the protein which can react with capsaicin. They translated distinct genes from this library in cultured cells that usually don’t react with the compound. Following extensive research, a gene was found that was capable of making cells react to capsaicin (Figure 2). The gene encoding the protein responsible for sensing capsaicin had been identified! Studies in the future demonstrated that the identified gene expressed a specific ion channel protein and this newly found receptor for capsaicin was afterward named TRPV1. When Julius studies the capability of the protein to react to heat, he understood that he had found a heat-sensitive receptor that is triggered at temperatures sensed as painful (Figure 2).

The unearthing of TRPV1 was a cutting-edge finding leading the way to the discovery of further temperature-sensitive receptors. Both Ardem Patapoutian & David Julius separately employed the menthol, a chemical compound to find TRPM8, a receptor that was identified to be triggered by cold. Further ion channels associated with TRPM8 & TRPV1 were found and identified to be triggered by various temperature ranges. Several labs carried studies to research the functions of these ion channels in heat sensation by employing genetically tailored mice that lacked these recently found genes. The finding of TRPV1 by David Julius enables us to learn how dissimilarities in temperature can trigger electrical impulses in the nervous system.

The Nobel Prize In Medicine 2019 –  Read For More Details

While the dynamics for the sensation of temperature were unraveling, it still was unclear about the conversion of mechanical stimuli into our sensation of pressure & touch. Scientists had previously identified bacterial mechanical sensors, however, the dynamics behind the vertebrates’ touch remained a mystery. Ardem Patapoutian while working at Scripps Research (California) aimed to find the tricky receptors that are triggered by mechanical stimuli.

Patapoutian and his coworkers initially found a cell line that produces a quantifiable electric signal when cells were jabbed with a micropipette. It was presumed that the receptor triggered by mechanical force is an ion channel. Later, 72 candidate genes expressing the prospective receptors were found. These genes were turned off individually to find the gene causing mechanosensitivity in the researched cells. Following a laborious hunt, Patapoutian and his collaborators were successful in finding a particular gene when silenced led to the inactivation of sensitivity to jabbing with a micropipette. A novel and unique mechanosensitive ion channel had been found and was termed Piezo1 (Greek: í; píesi), meaning pressure. Subsequently, using Piezo1’s similarity, another gene was found and termed Piezo2. Sensory nerve cells were identified to encode increasing levels of Piezo2 and additional research strongly established that Piezo2 & Piezo1 are ion channels that are instantly triggered by the application of pressure on plasma membranes (Figure 3).

Patapoutian’s discovery resulted in a set of publications from his and other teams showing that the Piezo2 ion channel is crucial for the perception of touch. Furthermore, Piezo2 was demonstrated to serve an imperative function in the vital sensing of motion and body position, referred to as proprioception. In an additional study, Piezo2 & Piezo1 ion channels have been demonstrated to control further crucial physiological processes like urinary bladder control, respiration, and blood pressure.

It all makes clear!

The breakthrough findings of Piezo channels, TRPM8 & TRPV1 by 2021 Nobel laureates have enabled us to learn how mechanical force, cold, and heat can start the nerve impulses that enable us to sense and adjust to the environment. The TRP ion channels are key for our competence to sense heat or cold. The Piezo2 ion channel provides us with the ability to sense the movement & position of our body parts and perception of touch. Additionally, Piezo and TRP ion channels contribute to many further physiological roles that rely on perceiving mechanical stimuli or temperature. Arduous study stemming from 2021 Nobel Prize won findings concentrates on explaining their roles in different kinds of physiological processes. This expertise is being employed to devise treatments for numerous disease conditions like chronic pain (Figure 4). 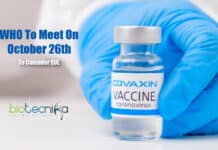 WHO: Meeting For Covaxin’s Emergency Listing Will Be Held On October 26 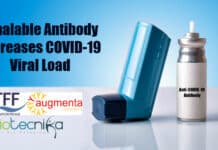 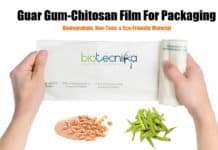