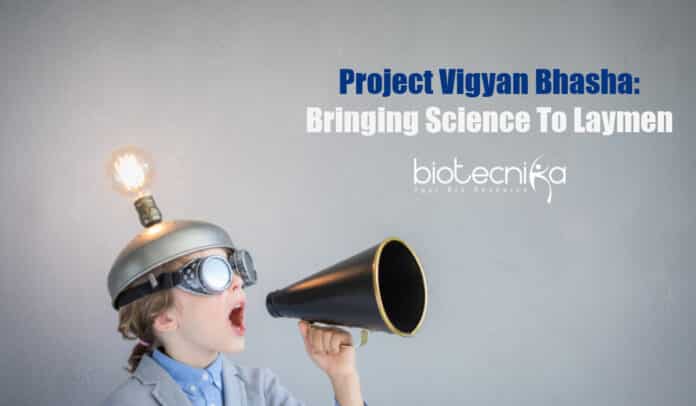 Education in one’s first language is crucial for easy understanding grasping concepts associated with technology & science. Nonetheless, in the current world with the rapid growth of technology & science research, simply learning from school is not sufficient. It could get out of date immediately. Informal education spaces like science news in social media messages & newspapers, popular science books, and science clubs, give opportunities for fostering a learning society.

Vigyan Prasar (VP) has been striving to ignite curiosity in science within people employing every kind of multimedia & physical touchpoints. Mass response for the Vigyan Prasar’s initiatives to boost scientific communication via regional languages has consistently been huge and is mostly going increase more.

In the future, VP is aiming to introduce field-level activities in all distinct headquarters. Accepting the responsibility for the upcoming future would be undertaken by several volunteers from different educational, media, nongovernment, and government institutes who have played a major role in helping with these efforts in different UTs and states.

VP held a one-day workshop on Wednesday at the IIC (India International Centre), New Delhi for reviewing and

planning ahead its primary project known as SCoPE (Science Communication, Popularisation and Extension) in Indian languages (also referred to as Vigya Bhasha). International participants who spoke in different languages also joined the meeting.

Additionally, elite scientific speakers from all around India came to plan & prepare actionable items for the projects and to review the work carried out till then. These comprised delegates from S&T departments, state, technology & science centers, and universities all over India.

The brain behind this study and VP’s Director, Dr. Nakul Parashar stated that to assure effective & quick imposition of science popularization & communication at every societal level, associating with one’s own mother tongues is the first and foremost step.

He remarked that there are several challenges however, with a devoted team of scientific communicators & effective processes, the project has accomplished many goals in a small time period.

From making television programs for the recent scientific news; from the publication of leading science books to using social media for understanding the youth’s imagination; from leading science magazines to routine periodic lectures on recent cutting edge research & development, the project Vigyan Bhasha has released science extension, popularization, and communication in selected Indian languages in the last 2 years.

One of the massive & successful initiatives, under this project was the gathering for Ramanujan Yatra- a national popularization initiative to convey the glorious accomplishment, struggle, and strife of Ramanujan, the mathematician, and simultaneously tackle the mathematic phobia by introducing different aspects of advanced mathematics in a means that is intelligible and appealing.

Training & sensitizing media professionals towards scientific communication facilitate positioning popular science and science news in television & print. With this vision in bringing science to laymen, skill upgrading programs were organized on how to express science to the general mass for journalism & media students and working journalists. These capacity-building programs have captured extensive demand and appreciation.

Releasing leading science books on advanced concepts in Indian languages has already started in a small manner. Shortly, VP would release publications in different Indian languages and even make an initiative to circulate publication via bookseller-mediated regular sales like online sales, meals, and book fairs.

In the upcoming years, the work would spread to other languages like tribal dialects in the second phase. Along with local support, people, and resources in the specific districts, VP is on the verge to become a bellwether of science popularization, under the governance of the project Vigyan Bhasha (SCopE in Indian languages).