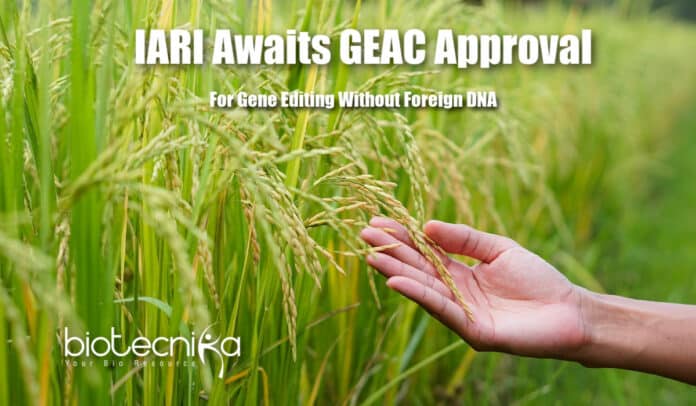 While the center investigates the statements regarding the exporting of uncertified GM (Genetically Modified) rice to Europe, it is yet to finalize a study proposal by its own researchers which would enable plants to be genetically altered without the requirement for traditional transgenic methodology. Unlike the traditional GM methodology comprising the integration of foreign DNA, the new technique comprises the usage of gene engineering tools to straight away alter the genome of the plants.

IARI (Indian Agricultural Research Institute) researchers are in the process of making high-yield & resilient rice plants employing new gene engineering tools that are already authorized in several nations. They intend to introduce such genetically altered rice varieties to Indian farmers by the year 2024. Nonetheless, the proposal for considering this new tool as same as the traditional breeding technique because of its no foreign DNA introduction concept is still pending to be approved by the Indian governing body, the GEAC (Genetic Engineering Appraisal Committee). Its been almost 2 years since they have presented the guidelines for non-transgenic gene editing.

A.K Singh, the director stated IARI has studied golden rice before, which is

an old GM variety that was grown by introducing a foreign DNA into the rice plant from another organism. However, their trials stopped more than 5 years ago because of agronomic issues. India has not authorized the commercial cultivation of any genetically engineered food crop.

The Institute has currently shifted to advanced tools like SDN (Site-Directed Nuclease) 1& 2. They focus on bringing efficiency & precision into the breeding methods with genetic engineering techniques like CRISPR, whose pioneers were Nobel laurates for Chemistry in the year 2020.

Dr. Singh noted that for this scenario, the gene present within the plant is simply altered without introducing any outside DNA. When a foreign protein is introduced, safety assessments need to be performed. However, here this protein is derived from the same plant and is tweaked in a very minimal way similar to the natural mutation. Nonetheless, it is relatively precise and quick compared to the naturally introduced mutations or traditional breeding process which comprises numerous breeding cycles and trial & error. This new method has a great potential for starting a new Green Revolution.

A project collaboration supervised by the ICAR (Indian Council of Agricultural Research), which comprises the IARI is employing these methodologies to create rice varieties that are high-yielding, salinity-tolerant, and drought tolerant. They can potentially be available for commercial cultivation by 3 years, according to Dr. Singh.

Nonetheless, the proposal guidelines for such genetic engineering tools have been frozen with GEAC for nearly 2 years. In a message to Narendra, India’s Prime Minister in 2020, a team of experienced researchers belonging to the IAAG (India Agriculture Advancement Group) conveyed their concern about the unjustifiable delay.

A senior professional claimed that the guidelines had been presented to the GEAC in the month of January last year, after an expert review process and a big discussion with the public under the umbrella of DBT (Department of Biotechnology) & authorization from its RCGM (Review Committee on Genetic Manipulations).

The IAAG letter, which disagreed on the additional discussion with State governments, mentioned that the SDN 2 & SDN 1 groups of genome-altered plants don’t have any outside DNA when they are used for open field studies. The letter was signed by the former heads of the IISc (Indian Institute of Science), the NAAS (National Academy of Agricultural Sciences), and the ICAR.

Dr. Singh added that Japan, Australia, Canada, and the US are some of the nations which have already authorized the SDN 2 & 1 methodologies as it is not like GM, therefore such rice varieties can be exported without any issue.

Additionally, EFSA (European Food Safety Authority) has presented its views that these methodologies don’t require the same degree of safety evaluations as the traditional GM, even though the European Union has to approve the suggestion.