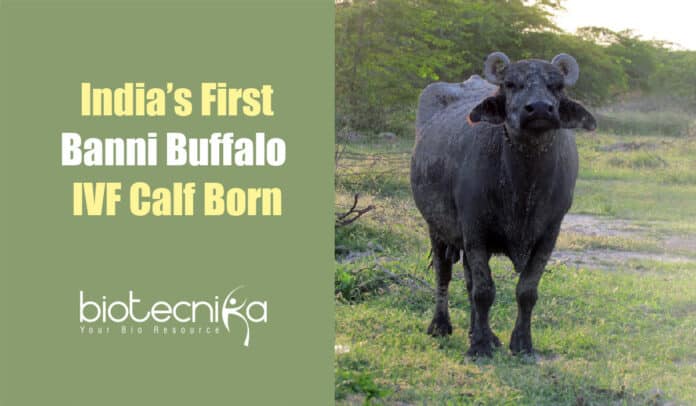 On 23rd October 2021, an official reported the birth of Banni ( a buffalo breed present mainly in Kutch, Gujarat) calf, the first IVF (In Vitro Fertilization) born calf in Gir Somnath, Gujarat at a farmer’s house.

The official added that this method was carried out to boost the genetically superior buffaloes’ number to enhance the production of milk.

Banni buffalo is popular for its superior milk-producing potential and resilience in a barren land.

A male calf was born from a Banni buffalo via the IVF process at a dairy farmer’s house in Gir Somnath’s Dhanej village. The Union Ministry of Dairying, Animal Husbandry, and Fisheries reported this as the first-ever calf of the Banni breed born with the IVF.

The ministry tweeted on October 22nd that they are glad to share the wonderful news regarding the birth of the first IVF Banni buffalo calf. Out of the six Banni IVF mediated pregnancies, this is the first IVF calf of Banni buffalo. This male calf was born at the doorsteps of the Sushila Agro farm’s farmer, Vinay L Vala.

Happy to share the good news of the birth of first #IVF calf of Buffalo breed namely – #BANNI in the country . This is the first #IVF_Banni_calf born out of 6 Banni IVF pregnancies established at the door steps of farmer namely Mr Vinay.L.Vala of Sushila Agro farms pic.twitter.com/vROwzIuLWq

Vinay Vala, the dairy farmer stated that the Banni breed had previously established six pregnancies from another eighteen recipient buffaloes at Vinay’s farm. These buffaloes were implanted with IVF technology and the study was conducted by JKBovagenix of the Raymond Group’s social initiative, NGO(Non-Governmental Organization) JK Trust.

He mentioned that out of the eighteen recipient buffaloes with implanted embryos from Banni donors, one test tube Banni buffalo calf was born on October 22nd morning and another few will be born by the coming days.

Vala claimed that he thought of shifting to Murrah & Banni breeds since the milk production capacity of desi buffaloes was uneven and low. About 8 of his Banni buffaloes produced good quantities of milk, around 9 to 12 liters per time in a steady way with less intake.

He remarked that the methodology can assist India to enhance the number of genetically superior buffaloes, and thereby increase milk production. He also stated that the NGO was even responsible for the first IVF calf called Krishna which was born on 09/01/2017.

Zawar said that in Gujarat, the JK Trust has established 125 IVF pregnancies within 24 months from Gauri, a donor cow from the Gir breed. On the other hand, Samadhi, another Gir donor will finish 100 IVF pregnancies by the next 2 months.

He told that for Banni buffalo, they got 29 eggs from 3 donors, out of which 18 embryos were allowed to develop. And out of 18 embryos, they chose 15, which were later implanted into nondescript recipient buffaloes, giving rise to 6 pregnancies.

He commented that an outstanding buffalo or cow in a herd is initially recognized as a donor, after which its embryo is allowed to mature or develop artificially in a lab, later it is allowed to fertilize with the superior quality semen inside a test tube, and then finally is implanted inside a recipient buffalo or cow.

Zawar answered that a cow has a birth potential of about giving birth to 50 calves via IVF technology when compared to the natural ability to give birth to 8-10 calves during its lifetime.

India has over 109 million buffaloes that account for 56% global buffalo population.