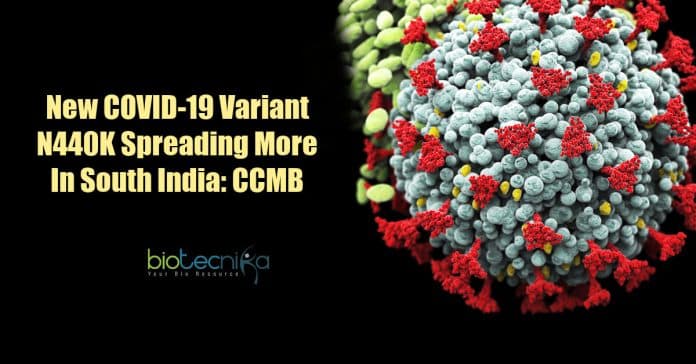 Some new SARS-CoV-2 variants are spreading more in some southern India. and closer monitoring is required, revealed in a study conducted by scientists of CSIR-CCMB.

The study additionally claimed that the mutants worrying several nations around the world had been detected with only a low pervasiveness in India up until now, yet sped up to add it might be just due to lack of enough sequencing.

Researchers from CCMB have been sequencing and analyzing the SARS- CoV-2 genome in India since the onset of the pandemic.

According to a recent study published by the scientists in an analysis of coronavirus variants in India and their evolution during this pandemic suggested that new types would keep arising as a result of the natural process of mutation and the most reliable way to control the possible damage by their spread is through comprehensive genome surveillance.

Rakesh Mishra, Director, CCMB, and the co-author of the study stated that they now prove that N440K (variant) is spreading more in south India. Closer monitoring is required to understand its spread clearly.

Accurate and prompt detection of new variants that might show greater infectivity or even worse clinical symptoms, like “immune escape,” will be exceptionally essential to pre-empt devastating outcomes.

The research stated that vaccines are effective; however, the “social vaccine” of masks, hand-hygiene, and social distance is the most potent defense against the COVID-19.

The researchers presented their study outcomes of analyzing more than 5,000 SARS-CoV-2 variants and how they have evolved during this pandemic.

The study summarised that as a result of the evolution, variants would keep developing.

The most reliable way to manage the prospective damages is to use substantial genome monitoring and take steps to avert the spread of new variants as and when identified.

CCMB Director stated that the novel variants stressing many nations worldwide have actually been detected with only a low prevalence in the country until now. They include the “variants with N501Y mutation with higher transmission rate and immune-escape E484K mutation.

He further stated that the apparently low prevalence might be just due to a lack of sequencing. More genome sequencing of SARS-CoV-2 has to be done throughout the nation to explicitly identify the emergence of these and various other novel variants.

The study also described how various SARS-CoV-2 variants gained prevalence in the nation in the past 1 year.

The lately identified variants in numerous nations have actually increased concerns due to their mutations in the spike protein used for binding to the receptors on human cells. In some cases, mutations in spike protein help the virus, enhancing the viral transmission rates by improving its affinity to human receptors.

Few of these SARS-CoV-2 variants can likewise be immune-escape and cause infection again. The body’s immune systems can not determine them from previous infections due to the modifications in their protein structures.

The results record the Spike mutation landscape of coronavirus that causes COVID-19, revealing the ones that have arisen with high pervasiveness in India and other countries.