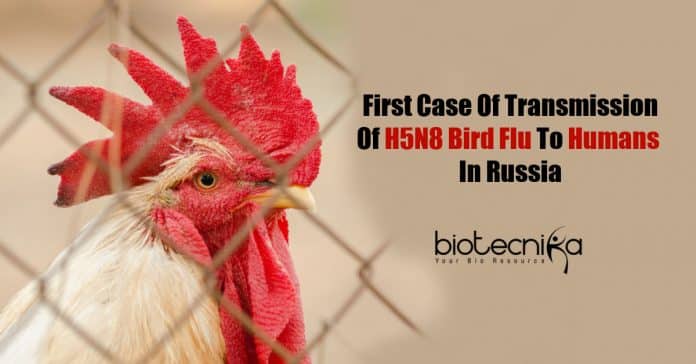 Scientists from Russia claimed that they have detected the first case of transmission of the H5N8 strain of bird flu to human beings and had informed the WHO.

Anna Popova, head of Russia’s health watchdog Rospotrebnadzor, claimed experts at the Vektor lab had isolated the strain’s genetic material from 7 employees at a poultry farm in south Russia, where an outbreak was reported amongst the birds last year.

She further said that the employees did not undergo any significant health repercussions.

He also stated that a report regarding the globe’s first case of transmission of the avian flu (H5N8) to human beings had been given to the WHO. There are various subtypes of bird flu viruses.

While the extremely transmittable strain H5N8 is deadly for birds, it has never before been identified to have actually infected humans.

Popova applauded “the crucial scientific discovery” and commented that “time will tell” if the infection can further undergo mutations.

She further stated that we have enough time to plan for feasible mutations and react in an ample and timely manner due to the early detection of the outbreak.

Humans can be infected with avian flu viruses, like bird flu subtypes A (H5N1) and A (H7N9) and swine viruses like swine flu subtypes like A  H1N1.

As per the WHO, individuals normally get infected via direct contact with infected animals or contaminated surroundings, and there is no sustained transmission amongst humans.

H5N1 in humans can lead to severe disease and has a death rate of 60%.

The Vektor State Virology and Biotechnology Centre, Koltsovo outside the Siberian city of Novosibirsk, has developed one of Russia’s many COVID-19 vaccines.

Russia’s COVID-19 vaccine Sputnik V was one of the first vaccines registered in August, months before Western competitors and even before large-scale clinical trials.

After preliminary skepticism in the West, the Lancet published outcomes revealing the Russian vaccine called after the Soviet-era satellite – to be safe and reliable.

Avian flu has actually raged in several European nations, including France, where hundreds and hundreds of birds have actually been culled to stop the infection.