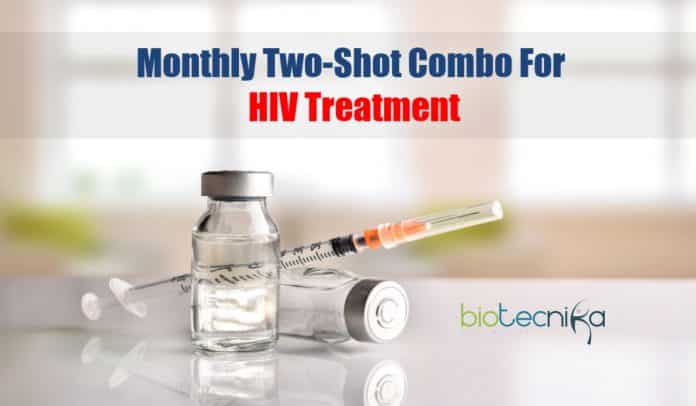 Routine medications currently used for combating AIDS infection can be replaced with the first long-acting drug combination, administered monthly after the successful approval from the United States regulators. Thursday’s authorization of the two-shot combination referred to as  Cabenuva is anticipated to make it less complicated for individuals to follow proper medication as well as to give more privacy. This will bring a dramatic change to the conventional way of taking multiple medicines many times a day, carefully scheduled between meals.

Dr. Steven Deeks, HIV specialist, the University of California (San Francisco), who has no connection to the drug producers mentioned that this will boost the standard and quality of life as it can reduce the treatment to once a month. He also added that individuals prefer not to get reminded that they are infected with HIV.

For the combined shot, Edurant (Generic: rilpivirine) and new pill cabotegravir from Johnson& Johnson’s Jansen’s plant and ViiV Healthcare respectively are mixed. They are packed together and administered as distinct injections once a month. Additionally dosing every 2 months is being examined.

The U.S. FDA authorized Cabenuva consumption for adults who have previously controlled HIV properly with traditional pills and those who have not exhibited any viral resistance signs to any of the drug combined in Cabenuva.

In order to make sure that the drugs are tolerated properly before shifting to injections, the agency additionally authorized the consumption of a tablet form of cabotegravir along with rilpivarine for a month.

ViiV claimed the shot combination would be charged US$ 5,940 for the first, higher dosage, and US$ 3,960 monthly later. The company stated that the price range is similar to the daily pill’s cost. The amount a patient pays relies on income, insurance, and many other things.

According to the studies, patients substantially favored the long-acting HIV treatment shots.

Dr. Judith Currier, HIV specialist, University of California (Los Angeles)asserted that even individuals consuming one-a-day pill reported an improvement in their living standards with the switch to shots. She works for ViiV Healthcare and wrote this as feedback for a study of the pill in the journal, New England Journal of Medicine.

Deeks mentioned that long-acting shots also provide a light at the end of the tunnel for people who have a difficult time adhering to the treatment, even individuals with substance abuse issues or mental illness.

He stated that there are profound unmet demands that the injections may fill.

Besides this ViiV Healthcare intends to seek authorization for cabotegravir for the prevention of HIV. Two new studies have shown that cabotegravir shots every 2 months were better compared to the routine Truvada drug for preventing the transmission of infection from an infected sex partner to an uninfected one.