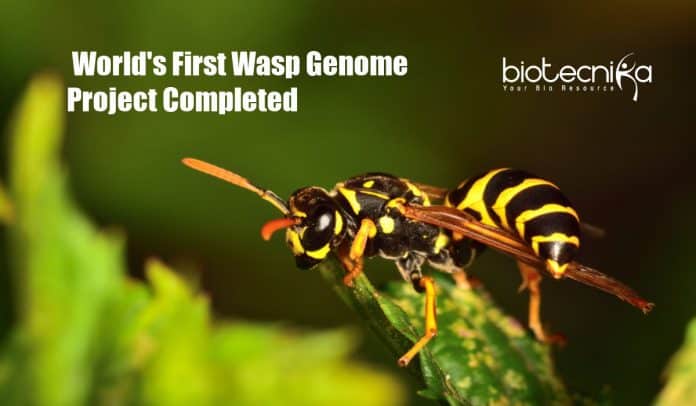 The genome of three wasps, out of which two are invasive wasps in New Zealand, have been sequenced by New Zealand researchers for the first time ever, and have reported their study in the Genetics Society of America journal G3.

A three-year project to sequence and interpret the genomes of the common wasp (Vespula vulgaris), German wasp (Vespula germanica), and the western yellowjacket (Vespula pensylvanica) was completed successfully by Genomics Aotearoa researchers working at the University of Otago and Te Herenga Waka–Victoria University of Wellington, along with researchers from California, Australia, and the UK.

In comprehending the biology of Vespula wasps, which are important pests affecting biodiversity, economics, and human health, this is a major milestone as it is the first genome produced globally.

In understanding the biology of a species, genomes, the total set of genetic material in an organism or cell are greatly valuable. New genetic solutions to problems can be developed by understanding what genes they have and how they work.

native insect species of New Zealand, with their populations possibly reaching up to 40 nests per hectare. Due to their flexible predation, reproductive capacity, and large colony sizes, they are significantly causing an impact on New Zealand’s ecosystems.

Control methods for these wasps are limited to pesticides currently, which could cause further problems such as pesticide resistance in wasps in the future, and suppressing their population is proving a challenge.

This research might be essential for monitoring control methods and would allow researchers to research and develop next-generation control strategies. Our understanding of how evolution elaborates mechanisms of living in colonies could also be got by studying the comparison between the highly social and interactive groups, Vespid wasps’ genomes, and the less social and the closely related paper wasps.

Genes that may encode specific biology suitable for targeting have also been identified by the New Zealand researchers. For novel control methods like damaging viruses, gene drives, and RNA interference, this information will provide species-specific targets.

Professor Dearden said that this provides us with a chance to make all the difference to a major environmental crisis as now, we have the chance for greater targeted and potent wasp control than has ever been possible by using cutting-edge technology.

Presently, as a part of the National Science Challenge’s novel pest control program in New Zealand, in order to control the invasive common wasp (Vespula vulgaris) in New Zealand, the genome is being used to research a potential gene drive targeting spermatogenesis by a team of researchers with Professor Phil Lester, along with Professor Dearden, and have published a paper recently on pest control for this invasive species using CRISPR gene drive as a potential method.

The genes involved in the development and production of sperm were studied in the research along with researching the potential for modifying these genes to make the queen wasps pass the transformed gene without any effect on her to the future generations.