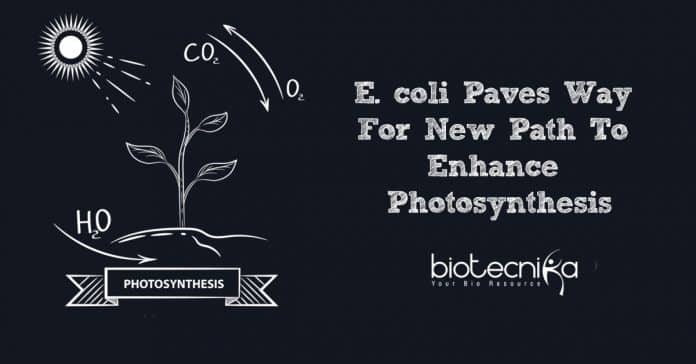 In order to carry out a study on how to speed up photosynthesis, scientists at Cornell University, have manipulated a key plant enzyme by engineering. They introduced the manipulated enzyme in Escherichia coli ( bacteria), in order to study the enzyme in an optimal experimental environment. Improving the speed of the enzyme would tremendously improve crop yields.

Scientists have known that the acceleration of the photosynthesis process would increase the crop yield. In photosynthesis, the plants convert water, light, and carbon dioxide into sucrose, a sugar used by the plants in their development to build new tissue, and release oxygen in the environment.

Rubisco, a carbon fixing catalyzing enzyme has been on focus due to its vital role. This enzyme is a slow functioning enzyme. Along with catalyzing carbon fixation, this enzyme also catalyzes a reaction that involves atmospheric oxygen, toxic to the plant. This toxic reaction creates byproducts and waste energy which in turn makes the photosynthesis reaction inefficient.

Professor Maureen Hanson, Cornell Unversity, commented that it would be convenient if Rubisco did not interact with oxygen, as well as if it works faster.

In an effort to achieve an efficient functioning Rubisco

, researchers extracted Rubisco from tobacco plants (a common model plant in research) and engineered it in E.coli. Hanson added that now mutation to improve the enzyme can be made and then tested on E.coli.

A big advantage of using bacteria to study the enzyme is that due to the rapid reproducibility of E.coli, the results can be obtained the very next day. Hanson added that if a new Rubisco is introduced into a plant, it takes a few months to obtain the results from it, which is not the case in bacteria.

Initial work by a different team that used engineered Rubisco from a tobacco plant in an E.coli led to the weak expression of Rubisco. Rubisco, in plants, is made of eight large and eight small subunits. The large subunit is encoded in a single gene, but the small subunit is encoded many genes. The presence of multiple versions of the enzyme in plants and the complex enzyme assembly process has made it difficult to experiment with Rubisco.

The team led by Myat Lin, the first author of the paper, was able to break the process down. In order to understand the property of the enzyme, they expressed a single type of large subunit and a single type of small subunit together in E.coli. This helped them attain Rubisco expression in E.coli and a match of it was found in the tobacco plant.

The team also discovered a Rubisco subunit that is found in trichomes, the tiny plant leaf hairs, worked faster than the subunits that are found in the leaf cells.

Hanson said that the researchers now can now engineer new versions pf plant Rubisco in E.coli to find if the properties of the enzyme are better. The improved version of the enzyme that can be put into a crop plant.

The study is published in the journal Nature Plants.