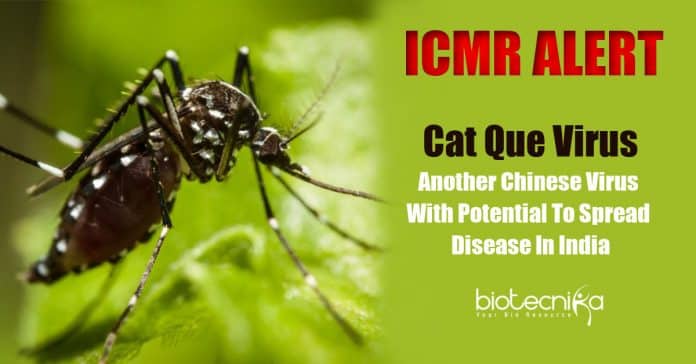 Amid the fight against the ongoing pandemic, researchers at the ICMR have alerted about one more Chinese virus, known as Cat Que Virus (CQV). Cat Que Virus has the ability to spread disease in India. As per the report, the CQV can trigger febrile illnesses, meningitis, and pediatric encephalitis in people.

According to the paper cited by 7 scientists at the ICMR’s National Institute of Virology, Pune, China and Vietnam have actually reported the presence of CQV in swine and Culex mosquitoes. Because of the spread of comparable types of Culex mosquitoes in India, the professionals emphasized the need to know the replication kinetics of the Virus.

ICMR stated that domesticated pigs are the main mammalian host of Cat Que Virus. The antibodies against the virus have actually been reported in pigs breed in China. This reveals that the Virus has developed a natural cycle in local regions.

2 out of the 883 serum samples tested showed the presence of antibodies for the tropical CQV. It shows that these 2 individuals were infected with this Virus. During the time of the study, the virus or its antibodies were not found in any humans.

According to the study released in the Indian Journal of Medical Research, the replication ability of Cat Que Virus in mosquitoes and positive results of anti-CQV IgG antibody in human serum samples tested shows a probable disease-causing potential of CQVirus in India. As a proactive step for recognizing the occurrence of this neglected tropical virus, testing more serum samples of humans and pigs is necessary.

The information revealed that mosquitoes such as Aedes aegypti, Culex quinquefasciatus, and Culex tritaeniorhynchus were susceptive to Cat Que Virus. Therefore, mosquitoes were seen to be a possible vector for CQV transmission to animal hosts.

The scientists also mentioned that the presence of CQV in China’s Culex mosquitoes, as well as Vietnam’s pigs, shows the susceptivity of Asian nations to the virus.