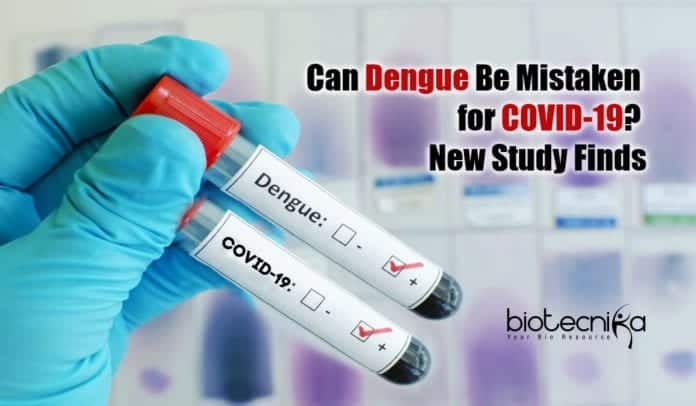 Can Dengue Be Mistaken for COVID-19? New Study Finds

Researchers report that tests specific to check for dengue sometimes led to a positive SARS-CoV-2 test and this, according to two independent research studies — one from Council of Scientific and Industrial Research-Indian Institute of Chemical Biology (CSIR-IICB) in Kolkata and another from a group in Israel.

In places where dengue is endemic and known to seasonally spike, this could lead to misdiagnoses, and skew public health responses, warn the scientists. This also calls for a deeper investigation to see if there are crucial similarities in the structure of the viruses causing Dengue and Covid-19.

Through a test where antibodies that are produced by the body during a dengue infection are used to probe for the presence of the virus, 55 people who had been confirmed to have a SARS-CoV-2 infection, were tested for dengue using a serology test, or a blood-based test, in the study from Israel, published in the peer-reviewed Clinical Infectious Diseases.

As antibodies and antigens are highly specific to each other, the principle of the testing is that a test is returned as ‘positive’ when an antibody binds to a specific place on the virus, called an antigen, like a key that goes into a lock. Around 12 (21%) returned positive among the 55 test samples. It is not expected for one virus to show affinity to the other because the viruses that cause dengue and coronaviruses belong to entirely different families.

Additionally, the report adds that another lot of 95 samples obtained from patients diagnosed with dengue before the advent of COVID-19, or before September 2019, targeting the spike (S) protein was positive.

According to a senior scientist at the IICB, Subhajit Biswas, in the study by CSIR-IICB, false-positive results in SARS-CoV-2 IgG/IgM rapid strip tests were produced by testing antibody-positive serum samples from 2017 (pre-dating the COVID-19 outbreak). This study appears in Medrxiv, a preprint repository of scientific publications that are open to public evaluation, and is yet to be peer-reviewed and has not been published in a journal. He said that there ought to be confirmatory testing with other tests in order to ensure it is not dengue as there is a risk that dengue may be identified as COVID-19 in places with recurrent epidemics of dengue.

Dr. Biswas said, “As the inherent error of the test itself is 4%, 22% testing positive is a significant number. Thus, to know if the dengue virus is able to stimulate the body’s immune system to produce antibodies that could then bind to the coronavirus, we need to study further.”

Rapid RT-PCR (real-time polymerase chain reaction) tests are the current confirmatory tests for COVID-19 and to confirm the presence of the virus, the test returns a result after checking for multiple genes. But many of the commercially deployed antigen tests are strip based-antibody tests that are also prone to error, particularly false negatives, though it returns results for the presence of the virus quickly. This is the reason why ICMR guidelines recommend repeat tests. An antibody test used to look for antibodies against the dengue virus protein is the widely employed dengue test.

He added, “Along with many parts of Southeast Asia, Brazil and India are highly endemic for dengue. Could this explain the relatively lower per million mortality compared to the places where there’s little dengue such as the United States and Europe? This could be worth investigating.”