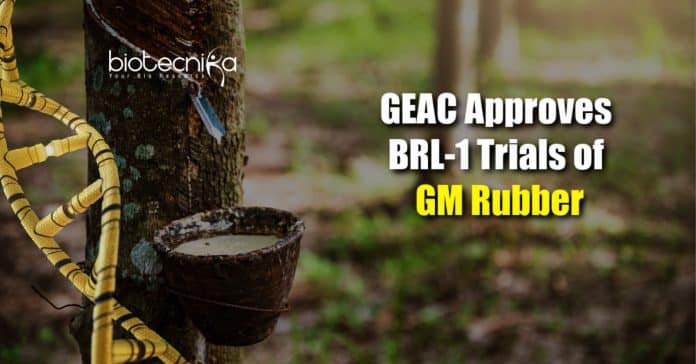 The GM rubber has additional copies of the Manganese Superoxide Dimutase (MnSOD) gene. This makes the modified plant tolerant and it can endure stressful climatic conditions and are less likely to display tapping panel dryness syndrome incidence, and hence productivity is enhanced. The GM plant is developed by the Rubber Research Institute of India, under Rubber Board. In a meeting on 28th July, GEAC approved the Biosafety Research level 1 Trials for the GM plant.

KN Raghavan, Executive director, Rubber Board, stated that the board is prepared to initiate the field trials once they receive the approval from the Central government for the same. The rubber plant is a perennial tree crop. It has a life span of more than 20 years. The proposed field trial is estimated to last for at least 10-15 years. Assam Government has granted a no-objection certificate (NOC) for the trial to the board.

Commercial cultivation can be considered to take 10 to 15 years, which is the time period for the proposed successful field trial.

Director of Rubber Research Institute of India, James Jacob, said that the RRII developed crop is the same rubber clone (RRII 105). The only distinction point is RRII has additional copies of the MnSOD gene. There is an antibiotic-resistant gene in the GM rubber, taken from bacteria. The antibiotic-resistant gene is a marker to identify the cell lines that are successfully transformed. In the commercially grown crops like Bt cotton in India and other edible GM crop species abroad, both these genes are present.

The gene MnSOD is found to be closely related to the antioxidant activity in rubber plants. It is expected that overexpression of this particular gene in the GM crop would impart tolerance to environmental stresses like high temperature, drought, cold etc. This gene is also expected to decrease tapping panel dryness in plants.

Due to the resistance offered by the gene when introduced in rubber, there tends to be better productivity.

The GM variety has been developed after a long and painstaking exercise said the Principal Scientist, RG Kala, RRII. Necessary expertise and training was undertaken by the team from the University of California and funded by a World Bank-funded project. The 2003 developed GM rubber was the first-ever GM commodity to be developed anywhere in the world by the board. The first GM tree species developed in India is the GM rubber.