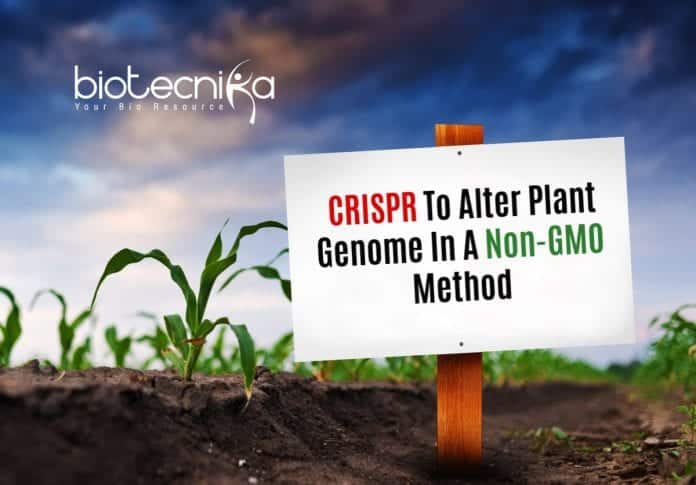 CRISPR/Cas9 is a recently developed, but widely accepted tool used to delete or replace a specific gene from the genome. A guide RNA specific to the target sequence guides a Cas9 enzyme that acts like molecular scissors to remove or replace the gene. Basically, the Cas9 enzyme cuts out the sequence sought by the guide RNA.

The crops could be improved tremendously by changing their genetic code using the CRISPR/Cas9 system. But usually, the CRISPR/Cas9 system delivers a foreign DNA during the process, resulting in a GMO plant. Most consumers prefer non-GMO products, and they have to undergo a rigorous evaluation also.

There are standards defined for GMO crops by the U.S. Department of Agriculture (USDA) and the Food and Drug Administration. They evaluate the presence of DNA sequences from other species in the GMO crop.

A non-GMO method allows the knock out of a gene without introducing a foreign DNA. For example, deleting the gene responsible for turning sliced apple brown and altering gene expression in sweet potatoes to make it more pest resistant, could be non-GMO methods.

Wusheng Liu, a plant biologist and biotechnologist in the Department of Horticultural Science, published a new study in the journal Plant Cell Reports on a new non-GMO method of using the CRISPR/Cas9 system in plants without introducing foreign DNA.

This new method use lipofection for delivering Cas9 protein into plant cells for the first time. This method delivers Cas9 in a non-GMO manner, as many consumers prefer non-GMO crops.

The positively charged lipids in lipofection form bubble-like liposomes around the Cas9/gRNA complex. The liposome then introduces the CRISPR cargo into the cells by fusing with the cellular membrane. The same method has been used to deliver the CRISPR complex into mammalian cells.

Delivering the Cas9 protein itself to the cells instead of the Cas9 DNA sequence makes sure there is no foreign DNA introduced. The Cas9 protein may last from three to five days before its degraded. Genetic alterations at unwanted sites, called off-target cleavage can be reduced by this.

But what is hard about this non-GMO CRISPR method is to introduce the Cas9 protein via liposome, the cell wall of the plant cell has to be removed. Protoplasts are plant cells without a cell wall. A careful combination of nutrients and plant hormones are required to convert a protoplast into the shoot and then to a whole plant. Methods for regenerating plants from protoplasts have been developed for more than 50 types of crops, including tomatoes, wheat, tobacco, and strawberries. But they don’t work well for every crop.

Liu is also working on a few other methods of introducing the Cas9 protein into plant cells that do not require removing the cell wall, including the method that uses nanoparticles to introduce the Cas9 protein into pollen grains. The pollen tube will introduce Cas9 into the ovule along with the sperm when the pollen is used to fertilize a female flower. The desired genetic edits produced by the CRISPR complex will be present in some percentage of the resulting seed. He is planning to use this method in hemp and tomato first, before adapting them to other crops.