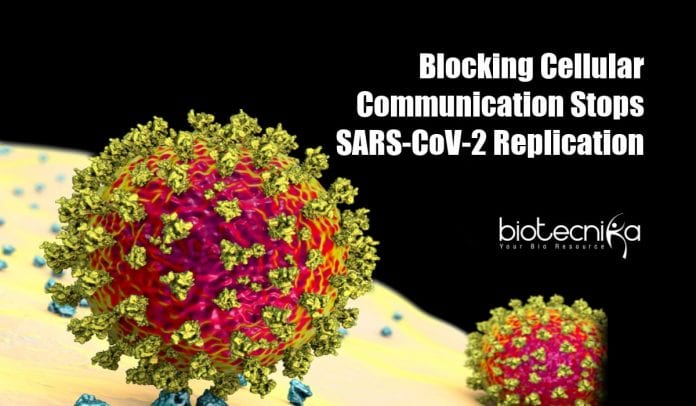 Phosphate groups play an important biochemical role in the transmission of signals within the cell which, for instance, trigger metabolic processes or stimulate cell growth. In order to control activity, the phosphate groups are often attached to proteins or removed. A change in the protein triggers the next one in this process and the signal is transmitted in a signaling cascade. The place where genes are switched on or off, the cell nucleus, is usually the target.

The full picture of all the communication pathways in a human cell that is infected with SARS-CoV-2 and the changes triggered by the infection have been documented for the first time by biochemists and virologists from Goethe University.

In order to do so, they considered the phosphoproteome and analyzed all proteins carrying a phosphate group. It was seen in the results that SARS-CoV-2 evidently uses above all those signaling pathways of the host cell where a growth signal is transmitted into the cell from outside and that the virus is no longer able to replicate if these signaling pathways are interrupted.

At Goethe University, from the Institute of Biochemistry II, Dr. Christian Münch explains, “Precisely at the point where the signal from outside the cell docks onto a signal receiver, the growth factor receptor, the signaling pathways of the growth factors can be blocked. However, the signals of different growth factor receptors can be blocked by a range of cancer drugs that are very effective and interrupt growth factor signaling pathways slightly further down the cascade. Five of these substances were tested on our cells, and it was seen that all five led to a complete stop of replication of SARS-CoV-2.”

At University Hospital Frankfurt, from the Institute of Medical Virology, Professor Jindrich Cinatl says, “On cultivated cells in the laboratory, we conducted our experiments, which means, without further tests, the results cannot be transferred to humans. Nonetheless, we know from trials with other infectious viruses that signaling pathways in viruses’ human host cells are often altered and that for virus replication, this is crucial. Simultaneously, in terms of development, previously approved drugs have a gigantic lead, and starting clinical studies would be possible soon on the basis of just a few more experiments and our results.”

In order to treat COVID-19, by means of specific inhibitors, the researchers have patented their method of interrupting signaling pathways via INNOVECTIS. INNOVECTIS has operated successfully as a service provider in the transfer of academic know-how into business practice since the time it was founded in 2000 as a subsidiary of Goethe University.