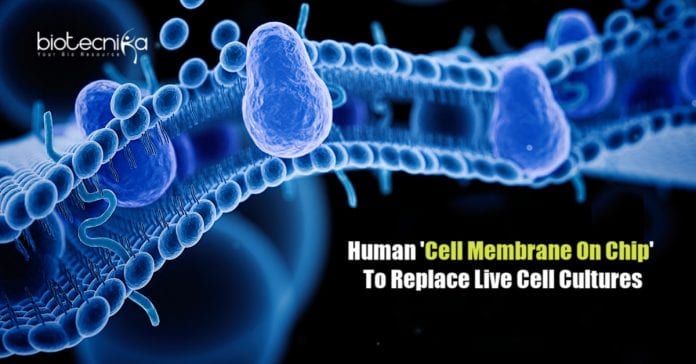 Scientists have developed a human cell ‘membrane on a chip’ to continuously monitor how infectious agents and drugs interact with our cells, in an effort to fight the novel coronavirus.

The study revealed that the device could mimic any type of cells like a human, plant, or bacterial cells. They published their results in the journals ACS Langmuir and ACS Nano.

According to the researchers from Cornell University, Stanford University in the US, and the University of Cambridge in the UK, they mainly looked into how the novel coronavirus attack human cell membranes and how it can be blocked.

The ‘membrane on chip’ was successfully used to monitor a specific class of proteins, which are the targets for more than 60% approved drugs, and also to monitor the activity of ion channels.

Typically, this kind of screening is done with live cells by pharmaceutical companies. Dr. Róisín Owens from Cambridge, who took part in the research, said the new chip could be used as an easy alternative.

Owens added that this method would reduce the number of false positives, making it through into the R&D pipeline and is compatible with high-throughput screening.

role by acting as the gatekeeper between the outside world and the cell.

So the researchers decided to create a sensor that possesses all the critical aspects of a cell membrane, like the fluidity, control over ion movement, and structure, without having the need to keep cells alive.

Any changes in an overlying membrane extracted from a cell can be monitored by the device using an electronic chip. This allows scientists to study how the cell interacts with the outside world. Using conducting polymer electrodes and transistors, the device integrates cell membranes.

The Cornell team collaborated with the Cambridge team to optimize a method to produce membrane from live cells and then coax them into polymeric electrodes preserving all their functionality to generate the on-chip membranes.

A natural environment and robust monitoring of membrane function are provided by the hydrated conducting polymers. The polymeric electrodes were optimized by the Stanford team for monitoring changes in the membranes.

The device does not need to keep cells alive, and the measurements can last for a long time.

The human ‘cell membrane on chip’ allows scientists to perform multiple measurements at the same time due to its small size as human cells.