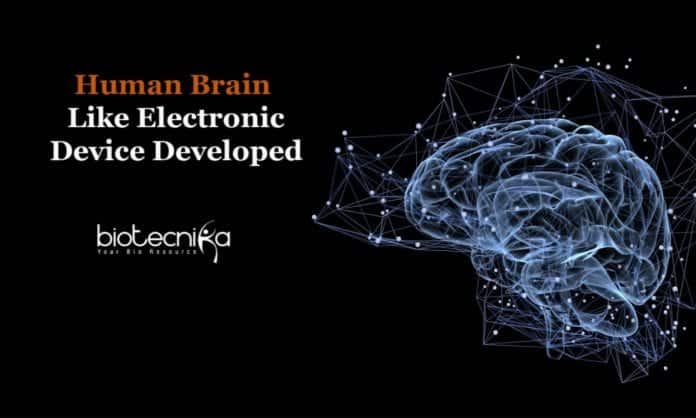 Device That Work Like Human Brain Has Been Developed By Scientists

Researchers have developed an ultra-low-power device capable of operating at the same voltage level as a brain through a major computing breakthrough.

A way to use electricity conducting biological filaments to make an electronic memory device known as a memristor has been figured out by the researchers at the University of Massachusetts in Amherst.

The scientists created a device as power-efficient as human brain synapse using protein nanowires developed from the bacterium Geobacter. The journal of Nature Communications published the new technology.

Co-author and computing engineering researcher Jun Yao said people never hoped they could create such a device, but now the ultra-low-power computing capabilities have provided the evidence.

It’s a breakthrough discovery, and scientists expect it will lead to a lot of studies in electronics that work in the biological voltage system.

Scientists tested the nanowires by sending pulsing on-off pattern through a thin metal thread that is 100 times smaller than human hair diameter.

An effect similar to the process of learning in the brain was created by the pattern of positive-negative charge.

The new device that can work like human brain has a learning capability not based on software, unlike conventional computers. Besides the need for a very lower amount of energy, the biological nanowires have many benefits over artificial silicon nanowires.

They could be used for various biomedical applications like the heart rate monitors as they are more stable in bodily fluids or water.

They could be even integrated with current biological processes for Cyborg-Esque purpose, said Dr. Yao.

Dr. Yao and his team are currently planning to fully explore the electronics and biology of the nanowires. Researchers hope the device that can work like human brain can interact with actual neurons in biological systems one day.