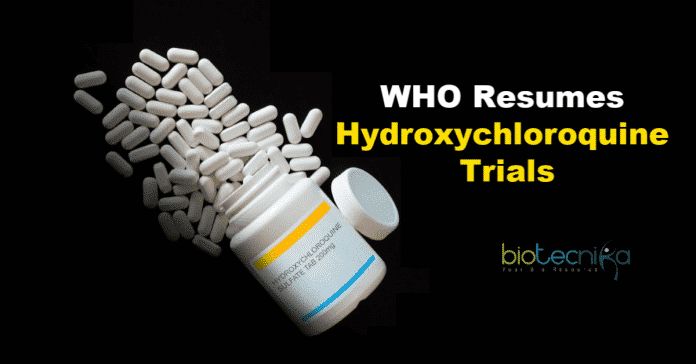 WHO resumes trial of hydroxychloroquine for COVID-19

After temporarily halting study over safety concerns, WHO resumes its trial on hydroxychloroquine – the malaria drug backed by Donald Trump to fight COVID-19.

Tedros Adhanom Ghebreyesus, WHO Director-General said during a press conference at the agency’s Geneva head office that the Data Safety Monitoring Board decided there was no reason to terminate the worldwide trial after examining available data on the drug.

He added, “The executive team supported the continuation of all arms of solidarity trial including hydroxychloroquine after obtaining this suggestion”.

WHO had announced, over safety concerns it had momentarily suspended its trial of the medication on 25 May 2020. The news came days after a research study (now being reviewed) released in the medical journal The Lancet discovered that greater risk of death was seen in hospitalized COVID-19 patients treated with hydroxychloroquine than those who didn’t take the drug.

The halt incites French drugmaker Sanofi as well as other companies to momentarily stop recruitment for their trials of COVID-19 drugs.

WHO authorities claimed, there is no proof that any kind of drug in fact minimizes the mortality in COVID-19 patients.

With more than 3,500 patients throughout 35 nations, the safety

board will continue to closely monitor the safety of all therapeutics being checked in its trials, said Tedros.

He added, “As part of our dedication to serve the world with science, solutions, and solidarity, WHO is committed to increasing the advancement of efficient therapies, diagnostics, and vaccines”.

Along with malaria, hydroxychloroquine is frequently used by doctors to treat rheumatoid lupus and arthritis. It is known to have significant adverse effects, including heart arrhythmia and muscle weakness. Various clinical trials are looking to see if it works in combating against COVID-19, however, it is not a tried and tested therapy.

WHO stated a week ago that there was no proof that the medication is really reliable against the COVID-19.

Dr. Mike Ryan, Executive director, WHO’s emergency program said, “We do not suggest using hydroxychloroquine or chloroquine for COVID-19 therapy outside randomized control tests or under proper close clinical guidance subject to whatever national regulatory authorities have actually made a decision”.

Last month Trump divulged that to avoid COVID-19 he was taking hydroxychloroquine every day. A memo released by Dr. Sean Conley – White House doctor, stated that after discussing with Trump regarding the proof in favor as well as against hydroxychloroquine, they concluded: “the potential gain from treatment surpasses the relative threats”.

The UNITED STATE FDA has alerted patients against taking chloroquine or hydroxychloroquine to treat with COVID-19 outside a medical facility or official medical trial setup. It also stated, it became aware of reports of “major heart rhythm problems” in individuals who were treated with the medicines.