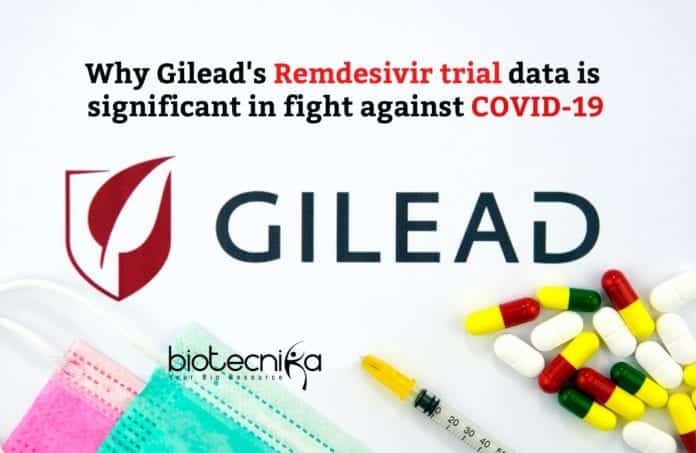 Gilead’s Remdesivir Trial Against Covid19
Why is the Trail Significant?

Considered as a potential medication against the Covid-19 infection, the preliminary clinical trial data of Gilead Sciences experimental antiviral drug Remdesivir was announced by the US drug major on April 29.

Previously, the results of a clinical trial conducted on Covid-19 patients in China were accidentally posted by the WHO and it showed that the trial failed to show benefit when compared to the patients who got a placebo or dummy pill. Just days after this, Gilead made its announcement of its trial. The leaked Covid-19 trial data of remdesivir was called ‘inconclusive’ by the drugmaker.


The hospitalized Covid-19 patients showed similar improvement,  whether they are receiving Remdesivir for five or 10 days, in clinical outcomes of Phase III clinical trial. Within 14 days, from both the treatment groups, more than half the patients were discharged from the hospital, said the researchers.

The study’s initial phase involved 397 patients randomized in a 1:1 ratio to receive 200 mg Remdesivir on the first day and then later on each of the following days until day five or ten, they’d receive 100 mg Resdesivir, and in addition to standard of care were administered intravenously. Across either of the treatment group, no new safety signals were identified with Remdesivir.

In the coming weeks, the full data for publication in a peer-reviewed journal would likely be submitted by Gilead.

Shortcomings of the trail


A gold standard for clinical trials is a double-blind placebo-controlled study, and the Gilead trial is not such a trial. The experimental drug will be given to one group of participants and a placebo or dummy pill will be given to those in the ‘control’ group, in a controlled study. Without any unconscious biases affecting the conclusion, such a trial is useful for comparison purposes to get a better understanding of the drug’s effectiveness. The physician nor the patient would know who received the drug. But only in the context of extraordinary circumstances, the trials should be done.

Chief Medical Officer of Gilead Sciences, Merdad Parsey said, “We are trying to evaluate an investigational agent alongside an evolving global pandemic, unlike traditional drug development. Information on how to best utilize Remdesivir and if it is a safe and effective treatment for Covid-19 is provided by multiple concurrent studies.”

The study comparing  Remdesivir to a placebo in 800 patients led by the US government’s National Institute of Allergy and Infectious Diseases (NIAID) will be announced later.

Additional 5,600 patients, including patients on mechanical ventilation, will be enrolled n an expansion phase of a study conducted by Gilead. Around the world, this study is being conducted at 180 trial sites, including sites in the United Kingdom, Taiwan, Switzerland, Sweden, Spain, Singapore, the Netherlands, Korea, Japan, Italy, Hong Kong, Germany, France, China, and the United States.


In both in vitro and in animal models, Remdesivir is a broad-spectrum antiviral that’s found to kill SARS, MERS, Marburg, and Ebola viruses. Disabling the virus RNA (ribonucleic acid) replication is it’s working mechanism.

To test this drug for the novel coronavirus, there are currently multiple trials going on. Remdesivir has not been approved or licensed anywhere in the world yet.