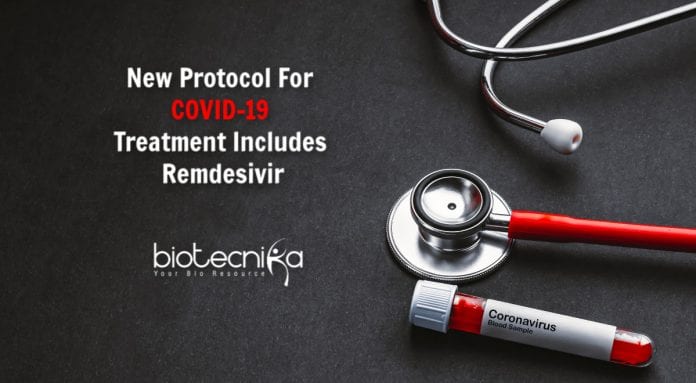 The use of remdesivir and off-label use of tocilizumab and convalescent plasma therapy has been included in the revised protocol for clinical management of Covid-19. The prescription of a drug for a condition other than what it has been officially approved for is called off-label use. Remdesivir was developed in 2014, as an antiviral, by Gilead Sciences, a California-based company for the treatment of Ebola

The list of symptoms has also been revised, including loss of taste and smell in the new protocol.

On June 1, India’s top drug regulatory body, the Drugs Controller General of India, approved remdesivir for the treatment of COVID-19 in hospitalized adults and children.

Remdesivir is a part of the World Health Organisation’s ongoing Solidarity Trials, and the United States Food and Drug Administration (USFDA) gave the drug an emergency use authorization on May 1.

Tocilizumab is an immunosuppressant manufactured by Roche Pharma and marketed by Cipla to treat rheumatoid arthritis. Actemra is the brand name under which the drug is sold. Some seriously ill patients in Mumbai were treated with Tocilizumab.

CPT or convalescent plasma therapy transfuses a COVID-19 patient with the blood plasma of a recovered patient. But the efficacy of CPT is still being studied.

The revised protocol emphasized the importance of oxygen therapy in COVID-19 treatment and restated that the RT-PCR test is the only acceptable diagnostic test for SARS-CoV-2.

The document said the median incubation period of the virus is 5. days, with a range of 2-14 days. The report noted that Tocilizumab could be used in mechanically ventilated patients not improving despite the use of steroids or in those with moderate disease with progressively increasing oxygen requirements. Patients moderately diseased (those on oxygen) can be treated with Remdesivir. Those with moderate disease, but who are not improving even after the use of steroids can be treated with convalescent plasma.

However, remdesivir can not be used in pregnant or lactating mothers, children below 12, and in cases of severe renal impairment. Likewise, tocilizumab can only be used after ruling out tuberculosis and other infections.

Hydroxychloroquine has displayed in vitro activity against SARS-CoV-2 and clinically beneficial in several small single-center studies. There is only limited evidence on its efficacy. So it can only be used as early in the disease course as possible and should be avoided in patients with severe disease.