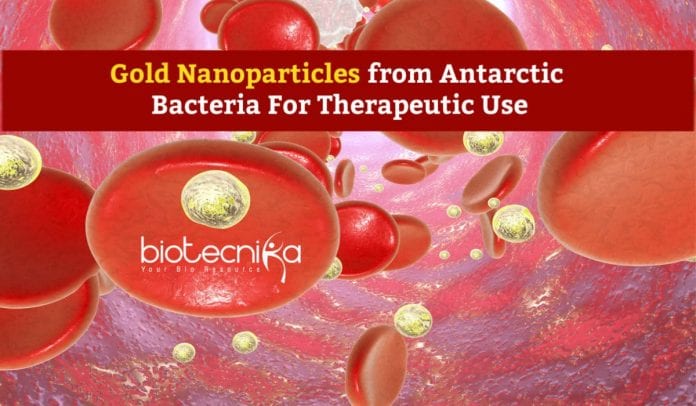 Through an eco-friendly, low-cost, and a non-toxic way, gold nanoparticles (GNPs) using psychrotolerant Antarctic bacteria have been successfully synthesized by the National Centre for Polar and Ocean Research (NCPOR) and the Goa University (GU).

NCPOR and GU have established through a study that under a controlled environment,
20-30-nm-sized spherical-shaped GNPs could be synthesized. These GNPs can be used as a composite therapeutic agent clinical trials, particularly in cholesterol-lowering, anti-diabetic, anti-viral, and anti-cancer drugs.

The genotoxic effect of GNPs on sulfate-reducing bacteria (SRB) was revealed in the NCPOR-GU study. By damaging the genetic information of the DNA of the bacterial cell by inhibiting the growth of SRB and its sulfide production, the GNPs displayed enough anti-bacterial properties.

In the fields of biomedical, optical, and electronics research, nanoparticles (NPs) have a wide variety of potential applications. GNPs are found to be effective in biomedical research among the metallic NPs that have been efficiently exploited for biomedical applications.

Nanoparticles or NPs (materials that are at least one dimension smaller than 100 nanometres) can provide an enormous driving force for diffusion, particularly at elevated temperatures and NPs have a high surface-to-volume ratio.

GNPs make a better candidate for use in the photovoltaic cell manufacturing industry as than the conventional bulk gold, they are found to have greater solar radiation absorbing ability. GNPs have unique physicochemical and optical properties. For example, the color of water becomes wine red in 100 nm gold colloidal particles, while the particles above 100 nm show blue or violet color in the water. Thus, for therapeutic imaging, these particles can be used. For various applications in therapeutic use including targeted drug delivery, bio-labeling, and detection and diagnosis of diseases, their biocompatibility, nontoxicity, stability, and high surface area make them suitable for such use. GNPs, as nano-carriers, are able to transfer various drugs made out of chemotherapeutic agents, small interfering RNAs, plasmid DNAs, proteins, and peptides to target diseased cells of the human body.

Even in the electronics industry, GNPs are found to be useful. By embedding GNPs in a porous manganese oxide as a room temperature catalyst to break down volatile organic compounds in air and combining GNPs with organic molecules, scientists have constructed a transistor known as NOMFET (Nanoparticle Organic Memory Field-Effect Transistor). NOMFETs can mimic the feature of the variation of the speed and strength of the signal going from neuron to neuron or the human synapse known as plasticity. These novel transistors have their application in artificial intelligence and they can also facilitate better recreation of certain types of human cognitive processes, such as image processing and recognition.

To reduce gold ion to GNPs using psychrotolerant Antarctic bacteria, NCPOR and GU have resorted to environmentally acceptable green chemistry procedures. Additionally, no stabilizing or reducing agents or any synthetic chemical additives were used. Special advantages were found in Antarctic bacteria such as reducing gold ion to Gold Nanoparticles (GNPs) with a good dispersion capability with mild reaction conditions.

In the Preparative Biochemistry & Biotechnology Journal, their research paper has been recently published.