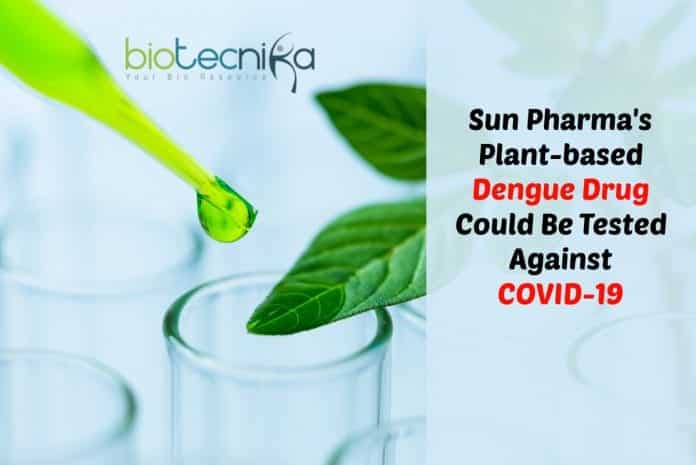 A proposal has been sent to the government by a drug manufacturer from Mumbai to carry out Phase II clinical trials of the drug to see if it can treat COVID-19 patients.

Sun Pharmaceutical, the nation’s largest drug manufacturer, may soon test its “plant-based” dengue drug under trial to check if it can treat COVID-19.

The drug manufacturer from Mumbai – the maker of Revital tablets and Volini gel – from the past 4 years the company has been developing the phytochemical-based drug against dengue.

The firm started working with the drug in partnership with CSIR and the International Centre for Genetic Engineering and Biotechnology (ICGEB) in 2016.

Sun Pharma’s official spokesperson said, “We have submitted a proposal to the CDSCO for carrying out Phase II clinical trials in India for possible treatment against COVID-19 based on the data obtained on the mechanism of activity of this drug”.

The pharma company is betting on the antiviral properties of the drug which were discovered effective against dengue in the initial stages of human tests, as per a senior official in the Ministry of Health and Family Welfare.

“The pharma company is likely to get the approval soon”, He added.

The signing of an agreement with the ICGEB to establish a new plant-based drug against dengue was announced by the company in May 2016.

This drug is prepared using Cissampelos pareira (Cipa) plant variety – a natural source of potent antiviral activity against all 4 serotypes of dengue.

The Sun Pharma team met CDSCO officials on 27 April 2020 Monday for a thorough rundown on the “mechanism of action” of the drug, said the above mentioned senior official in the Ministry of Health and Family Welfare.

The officials added, “Trials will certainly describe better but the company cited that coronavirus and dengue virus behaves in a similar way in the human body, so the dengue drug must be tried against COVID-19″.

“Cipa in addition to inherent antipyretic activity in Wistar rats possessed the capacity to down-regulate the production of TNF-α – a cytokine linked in extreme dengue condition. Significantly, it revealed no evidence of toxicity in Wistar rats, when administered in at high dosages of 2g/Kg body weight for 1 week”, as per a research study published in the Public Library of Science in 2015.

The research ended that it “permits more work to explore Cipa as a source for the development of an economical plant-based dengue treatment. For a dengue-endemic resource-poor nation such as India, Cipa may be of efficient relevance“.