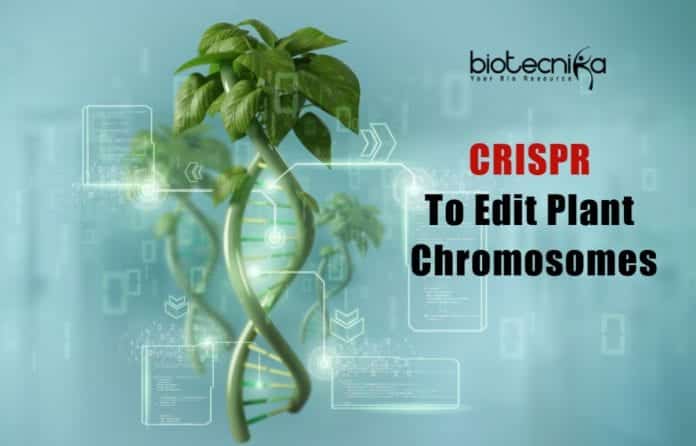 CRISPR/Cas9, also known as molecular scissors, is a technique widely used to modify genetic information in plants. A team of researchers led by Professor Andreas Houben from the Leibniz Institute of Plant Genetics and Crop Plant Research (IPK) in Gatersleben and Professor Holger Puchta of Karlsruhe Institute of Technology (KIT) used CRISPR to recombine entire chromosomes rather than using it to exchange single genes.

Humans have taken advantage of the evolution of organisms for thousands of years. They cultivate crops that are aromatic, resistant against diseases, tolerant to extreme climatic conditions, and produce high yields. They choose plants with desirable properties and crossbreed them for this purpose.

However, this procedure is time-consuming, and you cannot prevent undesired traits from entering the plants.

How plants can be cultivated more precisely and quickly was studied by the molecular biology Professor Holger Puchta. He received a funding of EUR 2.5 million from the Advanced Grant of the European Research Council (ERC) for his CRISBREED project. In genome editing, Holger Puchta is a pioneer. He uses CRISPR technology to modify the genetic information in plants. Genes can be easily inserted, removed, and exchanged using CRISPR technology.

Crops produced by this kind of genome editing does not contain any foreign DNA, which is why they are not considered as genetically modified organisms.

Researchers of KIT’s Botanical Institute under the leadership of Professor Holger Puchta collaborated with Professor Andreas Houben from IPK, Gatersleben, to achieve first decisive progress in using the molecular CRISPR/Cas scissors. With the help of the Cas9 protein originating from the Staphylococcus aureus bacterium, they exchanged the arms between chromosomes of Arabidopsis thaliana for the first time.

Individual genes are arranged in a fixed order on the chromosomes of a genome. CRISPR has allowed single gene modifications so far. But for the first time, researchers have modified and recombined the entire chromosome, which can be then inherited.

The new findings published in Nature Plants can bring major advances in crop cultivation. It is usually very difficult to combine the desired properties without negative traits. The genes are often arranged very close to each other, and therefore they are transmitted together. But these properties can be now separated by exchanging the arms between chromosomes.