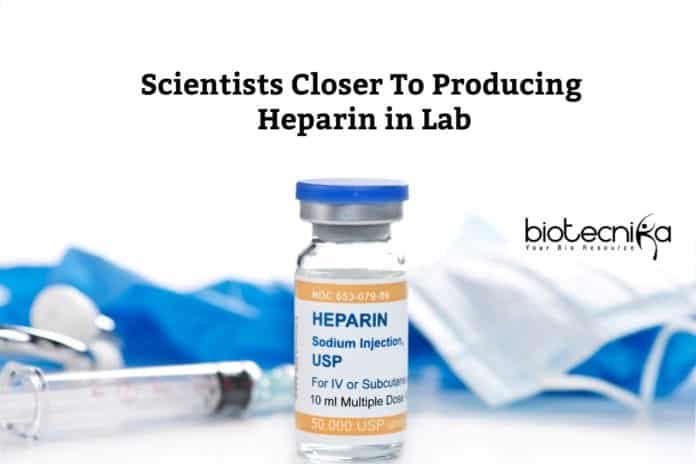 In the process of producing heparin in the laboratory, researchers from the University of California San Diego have moved one step closer to the ability to make heparin in cultured cells, according to a recent study published in the Proceedings of the National Academy of Sciences. Currently, cell-culture-based production of heparin is not possible even though heparin is a potent anticoagulant and the most prescribed drug in hospitals.

ZNF263 (zinc-finger protein 263), a critical gene in heparin biosynthesis was found by the researchers. The idea is to use genetic engineering to control this regulator in industrial cell lines and to pave the way for safe industrial production of heparin in well-controlled cell culture.

The way heparin is currently produced is a concern for safety, sustainability, and security reasons as it is produced by extracting the drug from pig intestines. Most manufacturing is done outside the USA, and to meet our needs, millions of pigs are needed each year. Moreover, there were dozens of deaths caused by contaminants from the pig preparations, about ten years ago. Thus, developing sustainable recombinant production is required. New insights on how exactly cells control

the synthesis of heparin are provided in the work in PNAS.

Heparan sulfates, that are produced by a different range of cells, in both the human body and in cell culture, are a general class of carbohydrates under which heparin is a special subtype. Mast cells are a special type of blood cells in which heparin is exclusively produced. Heparin cannot be produced successfully in cell culture, to this day. The UC San Diego researchers reasoned that certain gene regulators’ tissue-specific occurrence might give mast cells the unique ability to produce heparin and that heparin synthesis must be under such gene regulators (called transcription factors).

As the regulators for heparin were unknown, UC San Diego professors Nathan Lewis and Jeffrey Esko’s research team used bioinformatics software to scan the genes encoding enzymes involved in heparin production and specifically look for sequence elements that could represent transcription factors’ binding sites. The presence of such a binding site could indicate that the respective gene is regulated by a transcription factor, i.e., a corresponding gene regulator protein.

Nathan E. Lewis, professor at UC San Diego, who is the Co-Director of the CHO Systems Biology Center at the UC San Diego Jacobs School of Engineering explains, “One DNA sequence that stood out the most is preferred by a transcription factor called ZNF263 (zinc-finger protein 263). This is the first major regulator involved in heparin synthesis and there has been some research done on this gene regulator.”

In a human cell line that normally does not produce heparin, the UC San Diego researchers mutated ZNF263 using the gene-editing technology, CRISPR/Cas9. It was found that the heparan sulfate that this cell line would normally produce showed a reactivity that was closer to heparin and the heparan sulfate was now chemically altered.

ZNF263 repressing key genes involved in heparin production was seen in further experiments. Suppression of ZNF263 in mast cells (which produce heparin in vivo) and basophils, which are related to mast cells was seen by analysis of gene expression data from human white blood cells. The researchers report that mast cells are enabled to produce heparin because ZNF263 is suppressed in these cells and that ZNF263 appears to be an active repressor of heparin biosynthesis throughout most cell types.

At UC San Diego, in the Departments of Pediatrics and Bioengineering, a project scientist in Nathan Lewis’ lab, Philipp Spahn said, “Several additional gene regulators which can also contribute to heparin production and are now exciting objects of further study, were revealed by our bioinformatic analysis.” Ryan Weiss and Philipp Spahn of the UC San Diego led this work.