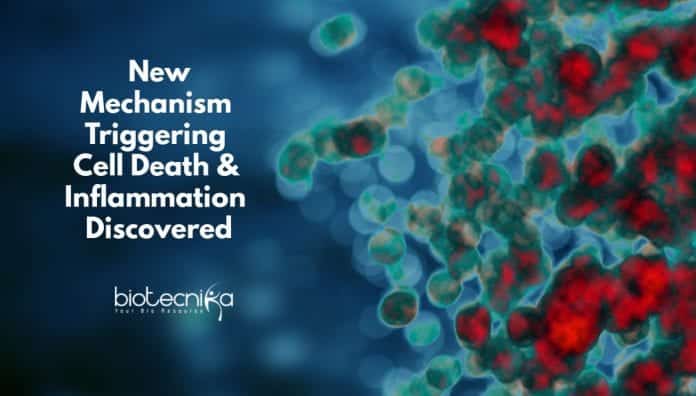 A new mechanism that could contribute to the pathogenesis of inflammatory diseases has been discovered by researchers from London, Texas, and Cologne. The researchers found that a protein that is best known for defending against incoming viruses, called ZBP1, is activated by sensing an unusual form of cellular genetic material (Z-nucleic acids), which leads to inflammation and cell death.

As opposed to the classical right-handed Watson-Crick double helix, the double-stranded DNA and RNA molecules having an unusual left-handed double helix structure are called the Z-form nucleic acids. Their biological function has remained poorly understood though these Z-nucleic acids were discovered more than 40 years ago.

To study the role of Z-DNA Binding Protein 1 (ZBP1), one of only two proteins in mammals that senses Z-nucleic acids, the group of Professor Manolis Pasparakis at the CECAD Cluster of Excellence in Aging Research of the University of Cologne cooperated with the Francis Crick Institute in London and University of Texas Health Science Center scientists. Previously, ZBP1 was shown to induce the death of the infected cells to prevent the viral spread and sense the genetic material of certain viruses.

The scientists had obtained evidence that even in the absence

of viral infection, ZBP1 can cause cell death and inflammation, in their earlier studies. The researchers found that ZBP1 was activated and triggered necroptosis, an inflammatory type of cell death, when the function of RIPK1, a protein inhibiting ZBP1 was compromised.

How can ZBP1 be activated in the absence of incoming viral infection was a key question behind the current study?

The scientists used experimental mouse models and found that the pro-inflammatory activity of ZBP1 depended on its ability to bind Z-nucleic acids. This suggested that by Z-form nucleic acids that existed within the cell, it gets activated.

What type of endogenous nucleic acids are bound by ZPB1 was the next question.

Pasparakis said, “We were able to show ZBP1 binding to double-stranded RNA. To demonstrate that this has the z-conformation, we currently lack the experimental methodology. However, our interpretation of our results based on all available structural studies is that ZBP1 binds to endogenous Z-RNA via its Za domains.”

Double-stranded RNA (dsRNA) is thought to provide the ligand activating ZBP1 during viral infection and is uncommon in cells but forms during the replication of certain viral genomes. Researchers hypothesized that endogenous retroelements could produce cellular dsRNA, or from active retrotransposons or ‘jumping genes’. The team of Manolis Pasparakis collaborated with George Kassiotis’ Retroviral Immunology Laboratory at the Francis Crick Institute to address the possible role of endogenous retroelements as sources of dsRNA. It was seen that most complementary, putatively double-stranded, RNA was derived from particular groups of endogenous retroelements, through computational analysis of RNA sequencing data from mouse skin.

Findings from this suggested that activation of ZPB1, including cell death and inflammation could be from sensing of cellular dsRNA, most likely derived from endogenous retroelements. In humans, particularly in patients with mutations of proteins inhibiting ZBP1 such as RIPK1, this mechanism may be relevant for the pathogenesis of inflammatory pathologies. Pasparakis remarked, “For so many years, Z-form nucleic acids have remained mysterious. Studying the proteins that sense them is our only means to investigate their function currently. Understanding where, why, and how they form within a cell and what is its purpose will be challenging, but for now, we have made some progress.”

The link to endogenous retroelements is a particularly fascinating aspect. Kassiotis commented, “How these genomic parasites affect our health is very little understood currently. It appears that over the course of evolution, in the response of our cells to damage, stress or true infection, some retrotransposons, which can mimic viral infection, have been recruited as useful partners, but diseases can also be caused due to this partnership, as it can also go wrong.”

Pasparakis concluded, “Sensing if Z-RNA produced by endogenous retroelements by ZBP1 could provide a potent trigger for inflammation and cell death, and can cause disease, just like during viral infection. In the future, understanding the underlying mechanisms may  lead to novel therapies for human diseases and now we have a long way to go.”

Source
New mechanism in the pathogenesis of inflammatory diseases