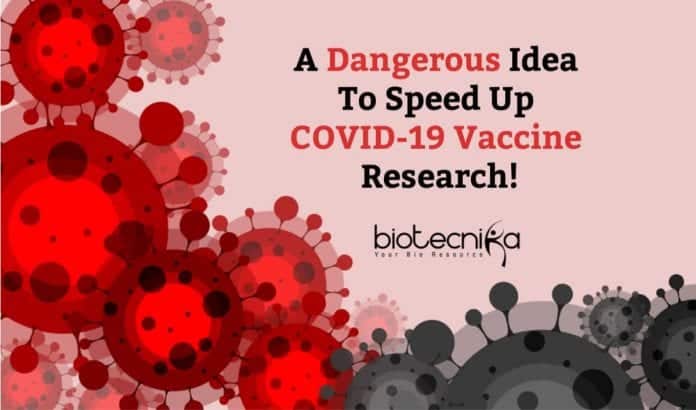 Around some 77 vaccines for the novel coronavirus are already in research, including six vaccines that have reached at least phase I of human trials. However, to have a vaccine that is not just effective against the virus but also is safe for the patients, it is going to take a long time. But now, there is a bold and dangerous idea to speed up the coronavirus vaccine research.

This method is known as “challenge trial,” and it is a type of study that has been done before to know if a particular vaccine is effective at preventing infection and generating an immune response against a virus. Some scientists and lawmakers believe that this way can be used and informed volunteers could be given the vaccine candidates against the SARS-CoV-2 virus.

For diseases such as malaria, that already have cures aside from a potential vaccine, challenge trails can be approved. However, in the case of Covid-19, the problem is that a few hundred young and healthy volunteers would have to be infected with the virus by the researchers and the vaccine would be given to only some of the volunteers. A placebo drug

would be given to the others so that there can be a comparison done on the results.

In such a study, to make sure that nobody already has the disease, before applying the vaccine, the isolation of the patients will be required. Then, during their COVID-19 convalescence, the vaccine is administered and they have to be isolated. Researchers would have to observe the evolution of each patient and perform routine tests.

However, the dangerous part about this method is that the young and older healthy patients can be killed by Covid-19 and there is no treatment for it. It could end up being a death sentence for a patient who knows the implications and still agrees to take part in such a study. Adding to this, there is no guarantee that the vaccine would be effective.

Yet, nearly 8,000 people from 52 countries have signed up for this vaccine challenge trials in a website called 1 Day Sooner is already up in support of it. Between the traditional vaccine research and challenge trials, the site offers the following comparison:

Such challenge trials would not be possible for all proposed drugs with the number of vaccine candidates increasing at a rapid pace. Hospitals that could be used to treat regular COVID-19 patients would be robbed for having hundreds of people isolated for weeks for each vaccine challenge trial.

In China, monkeys were given the virus after the vaccine candidate and it was seen that depending on the vaccine dose, the monkeys only developed mild symptoms or they were not infected. If this challenge study idea is approved, the same kind of study could be applied. However, it is still too early to tell if the drug would work on humans and even that particular drug is in phase I testing now.

In support of the idea, 35 House lawmakers led by Donna Shalala (D-Fla.) and Reps. Bill Foster (D-Ill.) wrote about it to the Food and Drug Administration.

The letter reads, “Our situation in this pandemic is analogous to war, in which there is a long tradition of volunteers risking their health and lives on dangerous missions for which they understand the risks and are willing to do so in order to help save the lives of others.”

There are also many scientists who are in support of the idea along with politicians, scientists including Marc Lipsitch, Stanley Plotkin, and Arthur Caplan.

However, as of now, the FDA is resisting this train of thought. Agency spokesman Michael Felberbaum said, “To prevent Covid-19, all possible options to most efficiently advance the development of safe and effective vaccines are being explored by the FDA. There may be feasibility and ethical issues presented by human challenge studies used to develop the Covid-19 vaccine while using animal models, these issues can be avoided.”